TAIPEI, TAIWAN - Media OutReach - 22 March 2021 - Organized by Taiwan's Foundation for Women's Rights Promotion and Development and the Ministry of Foreign Affairs, with support from the Taiwan Economic and Cultural Office in New York, the Accelerating Women's Economic Empowerment Webinar, which was held on 18 March, focused on policies and programs to help women achieve equality in the post-pandemic future.Speakers of the Accelerating Women's Economic Empowerment Webinar. "Women are bearing the brunt of the COIVD-19 crisis," said Denise Scotto, vice president of the International Federation of Women in Legal Careers,
Taiwan’s Foundation of Women’s Rights Promotion and Development
March 24, 2021 | 20:00

TAIPEI, TAIWAN - Media OutReach - 22 March 2021 - Organized by Taiwan's Foundation for Women's Rights Promotion and Development and the Ministry of Foreign Affairs, with support from the Taiwan Economic and Cultural Office in New York, the Accelerating Women's Economic Empowerment Webinar, which was held on 18 March, focused on policies and programs to help women achieve equality in the post-pandemic future. 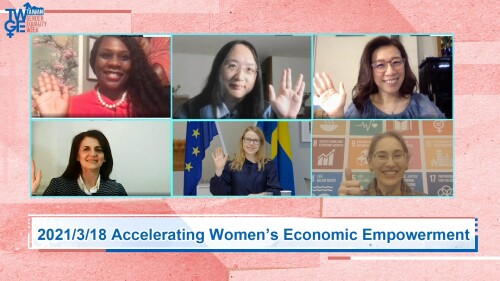 "Women are bearing the brunt of the COIVD-19 crisis," said Denise Scotto, vice president of the International Federation of Women in Legal Careers, as she opened on Accelerating Women's Economic Empowerment Webinar.

However, the new models of working from home, and greater access to technology and the internet may point to how the gender divide can be bridged.

This was the message conveyed by speakers at the Accelerating Women's Economic Empowerment webinar, which took place parallel to the United Nations' Commission on the Status of Women and during Women's History Month celebrations.

Tang pointed out that Taiwan is the first country in Asia to legalize same-sex marriage, equal pay day has come down to February 20, and over 41% of legislators in Taiwan's parliament are women.

Taiwan's first transgender minister also testified that she had never suffered discrimination in her job. However, there are still areas where Taiwan has much to do. "Less than a quarter of STEM (Science, Technology, Engineering, Math) students in tertiary education are women," said Tang.

Taiwan's achievements in controlling the pandemic have been well documented. But one aspect that has not been widely reported is the gendered aspect to disease control.

Tang highlighted the example of a Taiwanese boy who was teased for coming to school with a pink mask when medical supplies were being rationed. The boy called the government hotline to complain, and the next day the health minister and his top officials all wore pink masks during the daily press briefing.

Tang said, "The health minister said it was fine for a boy to wear pink, and added that his favorite cartoon character was the Pink Panther."

Technological advances are also helping level the playing field for young women, said Tang, sharing one initiative against plastic straws started by a 16-year-old Taiwanese woman. "She didn't have to wait until she was 18 or join a political party," said the digital minister, adding, "more and more young women and men are looking into e-participation and co-creation across sectors to create their own initiatives."

The Swedish minister for gender equality's state secretary Karin Strandås focused on applying a gender perspective to government policies and budgeting. "We must also focus on the role of men and boys as drivers for change," said Strandås, "Men and boys in all their diversity must be part of transforming gender norms and inequality."

Responding to the pandemic, Strandås said, "It is about building a better world and a better future for everyone." Although it is possible for men to take as much parental leave as women, Sweden has yet to achieve full equality in the workplace. "Reforms are necessary for women to enter the labor markets," said Strandås.

Strandås noted the link between economic inequality and domestic violence. "It is harder to leave a violent relationship if you are dependent on your partner," the state secretary said.

Taiwan's ambassador at large Lin Ching-Yi spoke about the role of women in law making. "The more female participation there is in politics, the more gender-based policy making there will be," said Lin.

Talking about the danger women face on the frontline of the pandemic as nurses and cleaners, Lin said she was initially worried for their safety. Thankfully, Taiwan's success in pandemic control has largely been down to gendered policy making. "All policies are based on gender equality," said Lin, "so only ten nurses have been infected with COVID-19 in Taiwan."

Other speakers shared their experiences in advancing women's economic rights and independence, investing in women's empowerment, and supporting marginalized women to earn, save money, and improve their health and wellbeing.

Algene Sajery, vice president of the Office of External Affairs at the US International Development Finance Corporation, outlined the Women's Initiative which has catalyzed more than US$7 billion of investment in projects that are owned by women, led by women, or provide a product or service that empowers women.

Iliriana Gashi, executive director of Kosova Women 4 Women, talked about her organization's efforts to finance women economically affected by the pandemic, working together with the government and international corporations to help women running small businesses.

Giving rights and more economic power to women is good for men too. "We are one human family, both men and women," said Scotto, "so all of humanity is empowered by empowering women."

Concluding the session, Lin said after the pandemic, global society will face new norms. There will be an opportunity to build different economic models through the internet or community models, and create new ways for women to participate equally.