Most of the airports in the world are safe, with long and steady landings. But there are also several most dangerous and scariest airports, and here are some of them.
Charlotte Pho
October 27, 2021 | 16:21

In terms of traveling long distances, flying on an airplane is one of the fastest, safest, and easiest ways to get to your destination. Unfortunately, not every runway has long, flat stretches. Let’s take a look at these 10 scariest airports in the world that you probably have never heard of before.

Land one plane it is an immense challenge in any circumstance. However, this challenge may be even greater if it is necessary to make a landing on the small island of Saba, in the Caribbean, which owns the smallest commercial airport of the world.

Named after Juancho Yrausquin, finance minister of the former Netherlands Antilles in the 1960s, the airport is only 400 meters away. To give you an idea, the largest commercial airstrip in Brazil belongs to the airport of Galeão, in the Rio de Janeiro, which has no less than 4 thousand meters.

To make things even more difficult, the track is squeezed between the sea and a mountain range. As a result, only four airlines of the company Windward Islands Airways (Winair) use the airport.

In 1965, the runway did not receive any aircraft for six months. Another striking fact about the small airport happened in 1998, when a hurricane simply destroyed the entire terminal and it needed to be rebuilt.

The island of Saba is basically a village, with only 2 thousand inhabitants and 13 km² of extension. With these figures, Saba is the smallest inhabited territory in the Americas.

In the middle of the 2010th century, the island came to be ruled by Jamaican pirates Edward, Thomas Henry Morgan. Until XNUMX, the islet was part of the Netherlands Antilles, but, with the dissolution of the country, it became a special municipality in the The Netherlands.

More than 300 people have died attempting to reach the summit of Mount Everest, with countless more injured. Yet the dangers begin well before trekkers even reach base camp. The most common way hikers reach the area is to fly to the tiny Himalayan settlement of Lukla, 9,383 feet above sea level.

The alternatives all involve several days trekking, and so multiple flights carry hikers between Kathmandu and Lukla every day. Although the flight time is just 25-30 minutes, the two airports are as different as night and day.

While far from being the world's highest civilian airport—that honor goes to Daocheng Yading Airport in China's Sichuan province—Lukla's altitude is still more than enough to cause pilots problems.

The airport is surrounded on all sides by steep, mountainous terrain. The short runway is perched on little more than a mountain shelf. At one end there's a wall and at the other a steep drop into the valley below.

Weather in the Himalayas is highly unpredictable. Sudden mist, fog, rainstorms or snow are always possible. Despite the short distance and short flight-time, the weather in Lukla can often be completely different from Kathmandu, and frequently changes while the airplane is on its way.

In such circumstances, planes turn around and return to Kathmandu. Afternoons are so frequently cloudy that most flights are scheduled for the early morning. Cancellations from Lukla are common.

São Paulo/Congonhas–Deputado Freitas Nobre Airport is one of the four commercial airports serving São Paulo, Brazil. The airport is named after the neighborhood where it is located, called Vila Congonhas, property of the descendants of Lucas Antônio Monteiro de Barros (1767–1851), Viscount of Congonhas do Campo, first president of the Province of São Paulo after the independence of Brazil in 1822, during the Empire. In turn, the Viscount's domain was named after the plural of a shrub known in Brazil as congonha-do-campo (Luxemburgia polyandra, of the Ochnaceae family). Since June 19, 2017 it is officially named after Deputy Freitas Nobre. The name Congonhas however remains mostly used. It is owned by the City of São Paulo, but operated by Infraero.

Congonhas has slot restrictions operating with a maximum of 30 operations/hour, being one of the five airports with such restrictions in Brazil. In 2019, it was the second busiest airport in Brazil by passenger traffic, after São Paulo–Guarulhos.

The central hall of the passenger terminal is considered one of the most outstanding examples of modern architecture in São Paulo. However, modernizing and enlargement work has been conducted at the terminal from 2003 onwards, while trying to preserve the look of the older, historic section. Today the main terminal has 51,535 m2 (554,718 sq.ft) of space.

HONDURANS are known to cross their fingers and pray when planes approach the central American country’s international airport and applaud after a successful descent.

Those privy to Toncontin International Airport’s track record know they need all the luck they can get.

The airport, located in Tegucigalpa — the capital of Honduras — has a reputation as one of the most treacherous airports in the world due to a difficult approach and a tragic history of deadly plane crashes. The American History Channel has previously ranked Toncontin International Airport as second most “dangerous” on the planet, after Lukla Airport, Nepal.

Surrounded by mountains and residential neighbourhoods, pilots must execute a dramatic 45 degree turn after negotiating the mountainous terrain just minutes prior to touching down in the bowl-shaped valley. They’re then faced with an unusually steep approach to the airport, which forces them to use more of the strip on landings and take-offs than they would at sea level.

Yet the airport’s runway is just 2,012 metres long, according to the airport’s website. Not only does that make taking off and landing more challenging but the site — built on the southern edge of Tegucigalpa in 1948 — still operates with old navigation equipment.

It’s a dangerous combination that unnerves even the most skilled pilots and has caused several of them to come undone. The deadliest accident occurred in 1989, when a Boeing commercial plane crashed into a mountainside on approach, killing 132 people. Morgue technician Luis Tellez told local media at the time that most of the bodies were burned beyond recognition.

Paro International Airport is the sole international airport of the four airports in Bhutan. It is 6 km (3.7 mi; 3.2 nmi) from Paro in a deep valley on the bank of the river Paro Chhu. With surrounding peaks as high as 5,500 m (18,000 ft), it is considered one of the world's most challenging airports, and fewer than two dozen pilots are certified to land at the airport.

Flights to and from Paro are allowed under visual meteorological conditions only and are restricted to daylight hours from sunrise to sunset. Paro airport was the only airport in Bhutan until 2011. Paro Airport is accessible by road, 6 km (3.7 mi; 3.2 nmi) from Paro city, and 54 km (34 mi; 29 nmi) from Thimphu by Paro-Thimphu road.

In 1968, the Indian Border Roads Organisation built an airstrip in the Paro valley, which was initially used for on-call helicopter operations by the Indian Armed Forces on behalf of the Royal Government of Bhutan. Bhutan's first airline, Drukair, was established by Royal Charter on 5 April 1981.

Paro Airport is deep in a valley 2,235 m (7,332 ft) above mean sea level and is surrounded by mountains as high as 5,500 m (18,000 ft). The airport was constructed with a runway 1,200 m (3,900 ft) in length, giving the Bhutanese government specific requirements for a choice of aircraft to be operated from Paro. They required an 18–20 seat STOL-capable aircraft with operating capabilities which included a high service ceiling, high rate of climb and high manoeuvrability. The major requirement for the aircraft was that it must be capable of flying Kolkata – Paro – Kolkata, a 1,200 km (750 mi; 650 nmi) round-trip, without refuelling, due to minimal infrastructure being available at Paro. Three aircraft types were considered after flight tests that had been conducted in India and Bhutan between 1978 and 1980; however, none was deemed suitable.

Telluride Regional Airport is located in southwest Colorado and is widely considered one of the scariest in the world. Around 5 miles (8 km) west of the town of Telluride, it is one of the highest airports by elevation in America, at 9,070 feet (2.76 km).

It was built in the 1980s and boasted over 9,400 operations a year, at least before the current COVID-19 crisis. While actually quite safe in reality, the approach to it can seem quite hair-raising, to say the least.

Located on a small plateau, it features 1,000-foot (300 mt) sheer cliffs at both ends of the runway, and pilots need to overcome strong vertical turbulence from the mountain winds during winter months. Not only that, but each end of the runway is actually slightly higher than the middle, creating a dip, although this was reduced during a 2009 renovation.

Many passengers who've taken the trip will confirm that it's quite the white-knuckle ride.

Built on permafrost, Svalbard airport not only seems scary, but it is also an engineering marvel in its own right. Located in Norway's Arctic archipelago, the 8,000-foot (2438 mt) runway is built directly on ice. Culverts under the runways allow water to run from the mountain. There are also no runway lights, so flights are only permitted during daylight. This may not seem like a big issue, until you realize that in the winter the sun does not really rise here.

The airport was built on permafrost with the runway insulated against the ground so it will not melt during the summer.

While its safety record is excellent, its location as one of the world's northernmost airports can make flights to it very challenging for pilots. Inclement weather and the proximity to the Earth's magnetic north pole can create visibility and navigational difficulties for even the best pilots.

For these reasons, one of Norway's worst air accidents occurred at this airport in 1996. A Russian flight bound for Longyearbyen crashed into a mountain after being about 3.2 km (2 miles) off its approach centerline, killing all 141 passengers on board.

Crash investigations later concluded that pilot error was the cause of the crash. 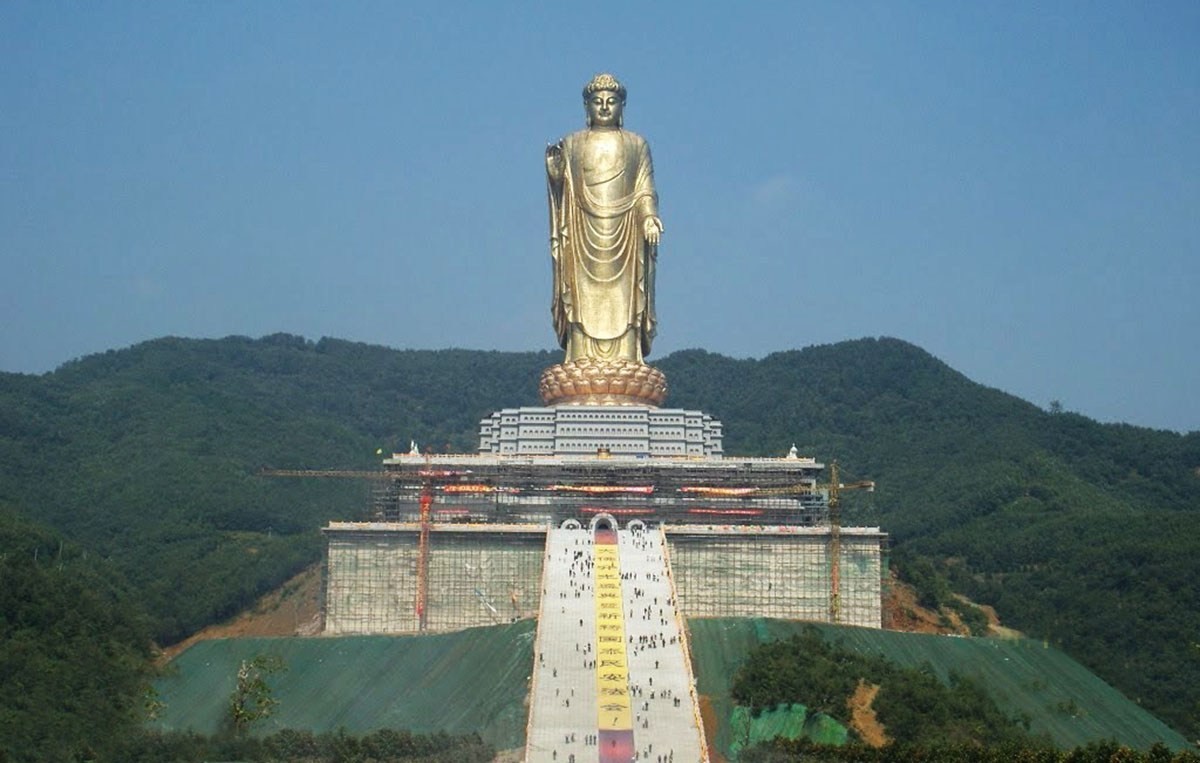 Top 7 Tallest And Biggest Statues In The World

Building statues is hard work, and some of the biggest and tallest statues in the world nowadays are considered masterpieces for their incredible architecture and spiritual meanings.
November 21, 2021 | 15:39

From the elegant Renault 5 to Mercedes-Benz 300 SL, these lovely and unique ordinary classic cars will give you the best driving experience of all time.
November 30, 2021 | 16:03
Phiên bản di động