DTiNews has transferred nearly VND49m donated by readers to a family in Thai Binh Province to help three members suffering from illnesses and keep a daughter in school.

DTiNews has transferred nearly VND49m donated by readers to a family in Thai Binh Province to help three members suffering from illnesses and keep a daughter in school. 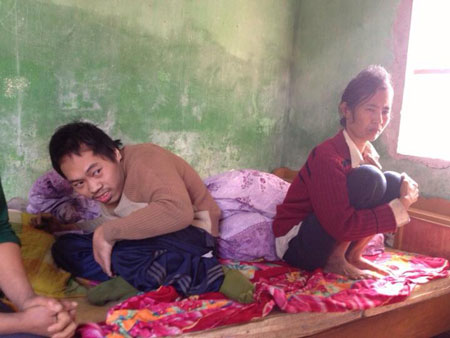 A representative of DTiNews and Major General Tran Van Trinh from the Ministry of Public Security visited the family of Nguyen Thi Xiu and Tran Viet Chu and gave them VND48,950,000 (USD2,300) raised by readers.

Their first child, Tran Van Duong, was born in 1993, but he was found to have a congenital spinal deformity, and paralysis has kept him mostly housebound for 22 years.

Chu's sister has suffered mental illness since she was 20, while Chu's own health is deteriorating, but he still tries to work to support his family.

Xiu and Chu want their daughter, Tran Thi Thao, to stay in school, but their poverty and mounting medical bills meant Thao had to decide whether to continue studying or find work to help her family.

After their story was published, Chu said they received a lot of support.

Xiu said, "We received presents from people in HCM City. Many other people called to give us support and encouragement. There was a group of 20 students from Vietnam Maritime University who came and gave us presents. I could never dream of such generosity."

With donations sent via DTiNews, the family has received support of more than VND70m, which has meant Chu can get medical help and Thao can continue pursuing her dream of becoming a doctor so she can help others.

Xiu and Chu offered their gratitude to donors.