SINGAPORE & NAPA - Media OutReach - 30 June 2021 - Adding to these new search functions is the Robert Parker Green Emblem – a recognitiongiven to selected wineries that have demonstrated extraordinary efforts in the pursuit of environmentally friendly practices. 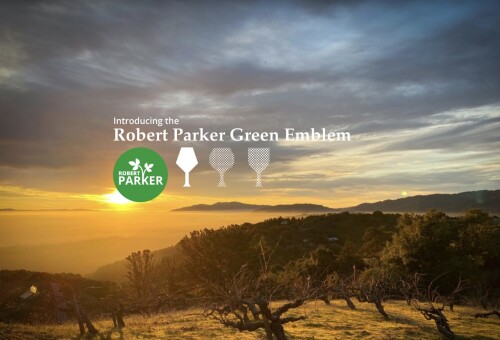 Organic: Organic viticulture involves a regulated set of farming principles, the degree of strictness versus conventional farming depending on the countries in which the grapes are produced and where the wine is sold. Throughout the world where the use of the word "organic" is legally controlled and protected, regulations can vary. In order to declare grapes as organically grown, the producer will need to seek certification by a recognised third-party auditing institution within the country of production. Usually, a vineyard will need to go through a three-year conversion period of documented and randomly tested adherence to the national legal guidelines before an organically grown certification can be granted. Generally speaking, organic grape growing precludes the use of artificial chemicals such as chemical fertilisers, herbicides and synthetic pesticides in the vineyard. Most countries allow naturally occurring compounds to be applied within stricter limits than conventional agriculture, such as the limited use of sulfur and copper spraying in vineyards for the production of wines from "organically grown grapes." Major organic certifying organisations around the world include: Ecocert, USDA Organic, BioGro NZ, Australian Certified Organic and EU Organic.

Biodynamic: First established by Rudolf Steiner in 1924, biodynamics is a set of farming practices that follow more philosophically based guidelines than those of conventional farming. It essentially uses a foundation of organic farming methods, such as the exclusion of artificial chemicals, and builds upon these. For example, specially crafted composts and herbal infusions are applied with rigor to vineyards. The movements and phases of celestial bodies are commonly used to determine the timing of key winemaking practices. Biodynamic certifying organisations include: Demeter and Biodyvin.

Robert Parker Green Emblem: Recognises a winery or producer that extends their efforts far beyond the requirements for organic and/or biodynamic certification, serving as true ambassadors for environmentally friendly practices.

To qualify for this award, a winery may or may not already be organic and/or biodynamic certified. Beyond or apart from certification, the producer needs to be an outstanding proponent of sustainability who looks towards long-term environmental protection and biodiversity. The Robert Parker Green Emblem is carefully considered and is given on rare and exceptional merit.

Says Nicolas Achard, CEO of Robert Parker Wine Advocate, "We are aware of the increased consumer desire for responsible and environmentally committed viticulture, and for easier access to this information. In the Robert Parker Wine Advocate team, we share these concerns, which is why we decided to develop the Robert Parker Green Emblem to highlight the vineyards that combine richness of taste and sustainable viticulture. We wish to facilitate the meeting between these committed winemakers, who prove to us how respect for the environment can magnify the terroirs and the vines without compromising the taste and the quality of the wines."

Robert Parker Wine Advocate comprises a global team of ten experienced wine reviewers who are committed to highlighting the world's best wines, shedding light on magnificent terroirs and their diversity, as well as exceptional craftsmen and timeless traditions. Led by Editor-in-Chief Lisa Perrotti-Brown MW (Master of Wine), the team of expert wine critics delved deeply into their respective assigned regions, and carefully weighed the case for including these wineries into the inaugural list. The first Robert Parker Green Emblem in 2021 includes 24 wineries with impeccable reputations for sustainability. The list is spread across eight countries and five continents.

"Our new Organic and Biodynamic filters and the Robert Parker Green Emblem recognitions are our way of recognising the increasing importance to wine consumers of sustainable practices in wine production. No other wine criticism website is thus empowering wine lovers who want to drink more sustainably. With these new enhancements to our website, our subscribers now have the ability to easily find great wines produced with a like-minded philosophy of sustaining the health and viability of our planet for future generations," says Perrotti-Brown.

Look for the new sustainability filters/symbols when accessing thousands of wine reviews at www.RobertParker.com.

Robert Parker Wine Advocate is the world's premier independent wine buyer's website with a database of more than 450,000 tasting notes, scores and reviews from professional critics around-the-world. For over 40 years, Robert Parker Wine Advocate (a part of the MICHELIN Group of companies) has been the global leader and independent consumer's guide to fine wine with its 100-point rating system and in-depth coverage of major wine regions.