(VNF) - Being a war invalid with 61% of body damage, Doctor Le Thanh Do, a veteran living in Hai Ba Trung district, (Hanoi) deeply empathizes with the difficulties handicapped people have to cope with. Empathy had triggered his decision of launching a factory producing free orthopedic appliances for needy handicapped.

(VNF) - Being a war invalid with 61% of body damage, Doctor Le Thanh Do, a veteran living in Hai Ba Trung district, (Hanoi) deeply empathizes with the difficulties handicapped people have to cope with. Empathy had triggered his decision of launching a factory producing free orthopedic appliances for needy handicapped. 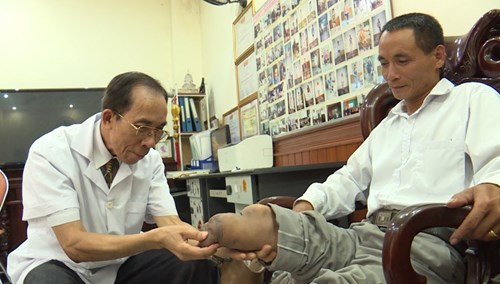 Seeing his activeness and agility, no one can imagine that Do has reached the age of 73. He is now living in a 3-storey house, covering an area of 30m2, with the first floor used as the company’s front office.

After staying for a while in a nursing center, Do decided to pursue a Bachelor program in the Hanoi Medical University. After 6 years of hard work, he graduated and got a job in the War Invadid Nursing Center in Thuan Thanh (Bac Ninh province)

After 10 years of working, he relocated to Hanoi to participate in the project of making prothestic limbs for war invalids and the disabled (sponsored by US government, implemented by the Ministry of Labours, the Invalids and Social Affairs - MOLISA).

The doctor afterwards was assigned to work as a lecturer providing training for orthopedic technicians in a project sponsored by the German government for the University of Labours and Society before retiring in 2005.

Understanding the losses and disadvantages handicapped people were struggling with, he decided to turn his flat (at No.242 Minh Khai str) into a factory manufacturing free-of-charge orthopedic appliances.

Thanks to the exisiting broad networking which was formed when he was still working, Do tried to mobilize supports from both domestic and overseas sources, such as the UniReach International (US), the YoungSan-ChoyoungKi Founation (Korea) to finance the manufacturing process and purchasing equipments.

At the same time, he also received supports the from University of Labour-Society. The University had helped him with sourcing orthopedic technicians in the early stage of his charitable factory.

Recalling the difficult time at the beginning of the venture, he said: “Our family financial condition was modest. Thankfully, the supports from my wife, my children have kept me staying persistently with the factory.”

Since that day on, Do has been dedicating his heart to the work in the factory. He even saved his modest pension to finance the non-for-profit business.

In over the last 12 years, Do’s his factory has helped 15 children to receive orthopedic surgeries and provide 600 free sets of orthopedic appliances (prothestic, limp, thoraco-lumbar spinal orthosis) for needy disabled of all age.

The orthopedic appliances have been served as ‘wings’ for the handicapped people, assisting them in reaching their dreams.

Nguyen Van Dau, (Linh Dam, Hanoi), got a job as a security staff in a company after receiving prothestic limb.

Duong Hong Nhat, a recipient of free Thoraco-Lumbar Spinal Orthosis and an industrial sewing machine has opened a small garment manufacturing shop at home to generate income for herself and support her family. 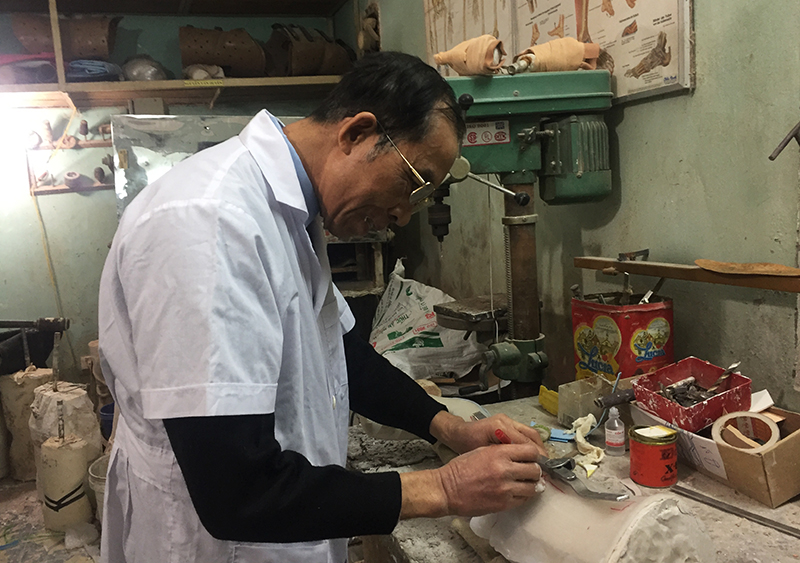 Manufacturing cost is high, while the sponsorship is limited, Do therefore had to try every possible way to reduce production cost, to make sure his products can reach as many needy people as possible.

Le Hai Linh, a technician in Do’s charitable factory said: “Our factory has 3 key technicians, and some part-time workers. Every year, we produced approximately 50 sets of appliances for the disabled.” In addition to making orthopedic appliances, Linh together with other technicians also provide other service to generate more incode for the factory.

Tran Hai Dang, a beneficiary of the factory (Thuong Tin district, Hanoi) shared his happy feeling while receiving prothestic limbs from Dr. Le Thanh Do: “This is the third time I went to the factory to change for new prothestic limbs. Everytime I came to Dr.Do’s house, he always showed me great attention and instructed me throughoutly on how to preserve the limbs.”

Dang has now completed his Bachelor programme in the University of Forestry, and is ascending to his dream.
Talking about Dr.Do, Tran Thu Nguyet, an orpathedic specialist from the University of Labour-Society said “He is a capable person, and dedicated worker. Despite he has retired, he still keep learning, exchanging knowledges with colleagues, to catch up with the progress of modern technology.”