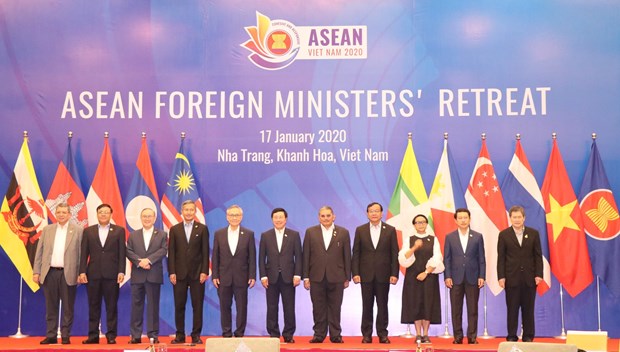 This is the first meeting of the ASEAN top diplomats this year to discuss the priority orientations of the regional grouping this year, especially the building of the community, the bloc’s foreign relations, and international and regional issues.

The ministers expressed their support and held that the themes and priority orientations tabled by Vietnam for ASEAN 2020 are suitable to the goal of the building of the ASEAN Community. ASEAN 2020 cooperation will focus on the fortification of the grouping’s solidarity and unity, and others. The ministers also agreed to push up the cooperation for the protection of the environment, peace, security and gender equity.

Representatives of the countries agreed with Vietnam’s proposal on the action plan of the ASEAN this year, according to which the bloc will realise a number of initiatives.

Regarding foreign relations, they stressed the importance of further broadening and deepening the ASEAN external ties. The ASEAN – New Zealand commemorative summit will be held on April 9 right after the 36th ASEAN summit to be held in Da Nang. The foreign ministers agreed to propose ASEAN top leaders to accept the invitation from the US President to a special summit to mark the fifth anniversary of the ASEAN – US strategic partnership to be held in the US in March, and accepted Vietnam’s proposal on sending the ASEAN Secretary General to inform the UN Security Council of the ASEAN – UN cooperation.

The ministers devoted much time exchanging ideas on the situation in the East Sea. They noted the progress in the negotiations on the Code of Conduct (COC) and expressed concern on land reclamation at sea, especially on the recent developments, including the serious incidents that violate sovereignty in the sea of a number of ASEAN members and intensify tension, erode trust and do not facilitate the COC negotiations.

The top diplomats reaffirmed the need to boost trust, refrain from and avoid actions that further complicate the situation, towards settling disputes by peaceful means, and to take international law, the UN Convention on the Law of the Sea (UNCLOS) as the basis for claims on sovereignty and sovereign right on the waters. They also stressed the need for the full implementation of the Declaration on the Conduct of Parties in the East Sea (DOC) so as to create an environment of mutual trust.

Minh thanked the support from the countries, describing it as a manifestation of the ASEAN solidarity and unity. He stressed that Vietnam will do all what it can to accomplish the tasks of the ASEAN 2020 Chair and cooperate with the countries for a region of peace, stability and prosperity, for a cohesive and responsive ASEAN.

In the afternoon the same day, Minh presided over an international press conference making known the outcomes of the AMM Retreat./.

US not impose tariff or sanction on Vietnam’s exports

Expat travel across Vietnam in the company of Teddy bear