(VNF) - On occasion of the 106th birthday of General Vo Nguyen Giap, a series of stamps featuring his image has officially been issued at a ceremony held in Quang Binh province on August 25.

(VNF) - On occasion of the 106th birthday of General Vo Nguyen Giap, a series of stamps featuring his image has officially been issued at a ceremony held in Quang Binh province on August 25.

Prime Minister Nguyen Xuan Phuc attended the event and signed the decision to issue the stamp collection.The stamps were designed by Nguyen Du, a painter from the Vietnam Post Corporation.

The set includes a single stamp and one stamp block, featuring portrait of General Giap, one of the 20th century’s foremost military commanders who was dressing in military uniform of the Vietnam's People Army (in the 1970s) and showing a friendly smile.

The background of the stamp features the historic Dien Bien Phu battle, one of the brilliant triumphs in the struggle for national independence and freedom.

According to the Minister of Information and Communication Truong Minh Tuan, the issuance of the special stamp series of Gen.Vo Nguyen Giap does not only aims to honour his tremendous contributions but also play a part in educating the Vietnamese people, particularly the young generations, on patriotism and the country’s history.

General Vo Nguyen Giap – Commander in Chief of the Vietnam People’s Army, was a military genius, an outstanding student of, and close friend to, the late President Ho Chi Minh.

He was born on August 25, 1911 in a family with rich tradition of patriotism in the central province of Quang Binh.
Giap's early revolutionary journey started since he entered the Hue national high-school, where he was taught by patriotic and outstanding teachers like Vo Liem Son and Dang Thai Mai.

As a student, he was a proactive participant in various anti-colonial movement, and later became a key member of Tan Viet revolutionist party and worked for several newspaper following progressive tendency in the central Vietnam. 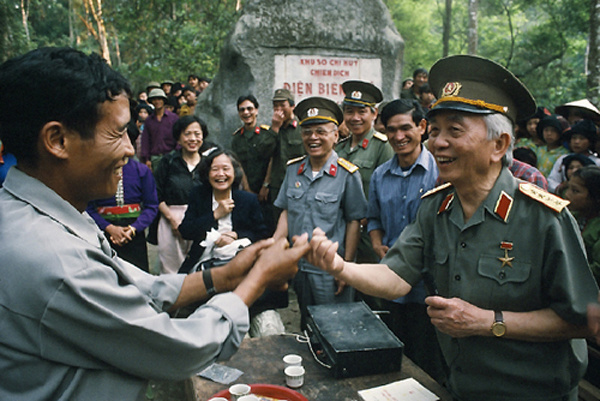 General Vo Nguyen Giap's contribution to the country was enormous. His name has long been associated with the two world-renowned battles, in which, under his leadership, Vietnamese people and army had gained glorious victories over vastly better equipped armies.

In the Dien Bien Phu battle in 1954, Gen. Giap was the Commander-in-Chief who helped Vietnam defeat the French colonists after over 80 years of being oppressed. Dien Bien Phu was considered a resounding victory throughout the five continents, marking the collapse of colonialism all over the world.

21 years later, Gen. Giap, once again, put his name in Vietnam's and the globe's history by leading his military to win the Ho Chi Minh battle in 1975. Ho Chi Minh battle victory was considered a vital stepping stone for the historic Spring Victory on April 30, 1975, which finally reunified the country's South, North after decades of being separated.

Gen. Giap was awarded with various prestigious merits from Vietnam and foreign countries and organisations, including the Gold Star Order, the Ho Chi Minh Order, the 70-year Party membership insignia and other noble orders and medals, in recognition for his huge contributions to the Party and country’s revolutionary cause.

Hundreds of thousand lined Hanoi's streets to bid farewell to the national hero in 2013 (source: vnexpress)

Gen. Giap passed away in 2013, at the age of 102. On the day his official memorial service was held, hundreds of thousand of people from different walks of life, of different ages, from out and inside Hanoi, flocked to the capital's streets, cheering, crying and holding aloft pictures of him, calling him the national legend, the "big brother” of the country.

Meanwhile, vast number of Vietnamese facebook users changed their avatar into Gen.Giap's picture, as a gesture of respect to the late Commander.

Nowadays, in the country, road in several provinces and cities in three regions, including Hanoi, HCM.City, Da Nang, Can Tho, Dong Nai are named after Vo Nguyen Giap, to commemorate the legendary General./.