There are many kinds of noodles made with bún (rice vermicelli), among which the most prominent in the North is, perhaps, bún thang.

Bún thang has been on festive tables in Hanoi for quite a long time.

Culture experts are inclined to think that thang in Han Chinese means ‘broth’, so bún thang can be understood as ‘rice vermicelli in broth’. Indeed, the core, or the soul, of this dish is the broth which results from simmering chicken or pig bones with salt water shrimp for hours. Any froth appearing on the surface has to be removed immediately to avoid turbidity. A standard broth has to be clear, elegantly sweet, with a touch of shrimp and dry mushroom flavour and aroma.

There are about twenty ingredients in a bowl of bún thang. Fibres of pure white, fine, tangled bún are the bún of choice. Small domestic chickens are boiled, their meat shredded finely, with a little shiny skin still attached. Thin pies of lean, pinkish pork paste are cut into fine threads. Fluffy shrimp pemmican makes it look, smell and taste even better. Some yellowish, dried threaded turnip marinated with magi is added. Eggs are mixed with a little vodka to make them thinner, and then fried on as little oil as possible, and only very briefly to make paper-thin sheets, which are then cut into fine strips. Thin-top mushroom, green onions and fragrant knotweed are indispensable, all finely chopped.

All these ingredients are skilfully arranged in a bowl to make it look like a flower with a slice of boiled egg as its pistil. As writer Vu Bang described it, ‘If a bowl of phở (rice noodle) looks like a colourful oil painting, then a bowl of bún thang depicts a clear and lively river with pencil colours, which are intermingled but not mixed.

Finally, the diner may choose to add shrimp paste and belostomatidae attar. As an expert once remarked, bún thang without shrimp paste is like sushi without wasabi. And the belostomatidae attar is like turning the light on at twilight. What a pity that this insect is near extinction because of pesticides, and the pungent smell and taste is becoming more and more a nostalgic fairy tale of the Hanoi people.

Bún thang used to be the delicacy of special occasions, such as New Year or big family events. Nowadays, it is available at any time. Many shops don’t use all the ingredients prescribed by traditional recipes. Yet the dish is good enough to make anyone, having tasted it once, remember it forever. 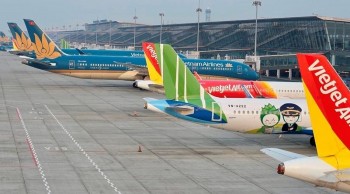