Nauru is an island country and microstate in Oceania, which has no official capital of its own and is also a favorite tourist destination of adventurers and curious wanderers.
Charlotte Pho
January 19, 2022 | 22:47

Nauru, officially the Republic of Nauru and formerly known as Pleasant Island, is an island country and microstate in Oceania, in the Central Pacific. Its nearest neighbour is Banaba Island in Kiribati, 300 km (190 mi) to the east. It further lies northwest of Tuvalu, 1,300 km (810 mi) northeast of Solomon Islands, east-northeast of Papua New Guinea, southeast of the Federated States of Micronesia and south of the Marshall Islands. With only a 21 km2 (8.1 sq mi) area, Nauru is the third-smallest country in the world behind Vatican City and Monaco, making it the smallest republic as well as the smallest island nation. Its population of about 10,000 is the world's second-smallest (not including colonies or overseas territories), after Vatican City.

Nauru is an island located in the Pacific Ocean, and it is the world’s second-smallest republic. Nauru does not have any official capital city, but government offices are located in the Yaren District. The country covers an area smaller than all the world’s nations except for Monaco and the Vatican City. With an estimated population of 9,400, Nauru is the second smallest country in the world by population after the Vatican City. The country is so obscure such that its national flag is a map showing people how to find the place. The flag features a horizontal line representing the Equator with a white star right beneath it indicating where Nauru lies.

Nauru – The country with no capital city

Yaren is often assumed to be the capital city of Nauru, but that is not the case. Nauru is a beautiful but tiny country, and has no official capital city, and even has no cities at all. Yaren District, which is located on the southern shore of the island, happens to be where most of the country’s prominent buildings are located, including Nauru’s Parliament House, the Nauru International Airport, and the Australia and Taiwan embassies (they are the only countries that have an ambassador to the country). Nauru is so tiny such that the airport's runway almost stretches across the entire Island. The country’s official airline used to land its only jet there until 2005 when Australian creditors acquired it.

The origin of the first inhabitants of Nauru and when they reached the island remain unknown. A long period of relative isolation is believed to account for the distinctiveness of the indigenous language. By the time of the arrival of Europeans in the early 18th century, Nauruan society consisted of 12 matrilineal kinship groups, each having a chief.

An English sailing vessel sighted the island in 1798, but extensive contact with Europeans did not begin until the 1830s, when the whaling industry penetrated eastern Micronesia, and Nauru became a port of call for vessels in search of food and water supplies. Shortly thereafter a small number of European beachcombers settled on the island, bringing with them alcohol, firearms, and foreign diseases. Intraisland warfare among competing districts escalated, becoming particularly intense in the 1880s. Encouraged by a few German traders concerned about their own interests on the island, Germany incorporated Nauru into its Marshall Islands protectorate in late 1888. The German administration and the arrival of the missionaries shortly thereafter brought an end to armed hostilities. In 1906 the Pacific Phosphate Company, a British concern, negotiated an agreement with the German administration to begin the mining of Nauru’s phosphate deposits, and the operation began the following year.

With the onset of World War I, a small Australian force occupied Nauru and removed most German nationals. In 1920 Nauru became a mandated territory within the framework of the League of Nations. Australia, Britain, and New Zealand were named as the responsible authorities, but in actual practice the administration remained in Australian hands. The phosphate industry was taken over by the newly formed British Phosphate Commission, a joint Australian, British, and New Zealand enterprise.

World War II brought another occupier when Japanese forces arrived in August 1942. In the following year, 1,200 Nauruans were taken to Truk (now Chuuk) to serve as forced labourers on Japanese military installations there. A Japanese airstrip on Nauru became the target of American bombers, and the island suffered air attacks for the next two years. In September 1945, Australian troops again took possession of Nauru. On January 31, 1946, with their numbers depleted by almost 500, 737 Nauruans were returned home.

Nauru's climate is hot and very humid year-round because of its proximity to the equator and the ocean. Nauru is hit by monsoon rains between November and February, but rarely has cyclones. Annual rainfall is highly variable and is influenced by the El Niño–Southern Oscillation, with several significant recorded droughts. The temperature on Nauru ranges between 30 and 35 °C (86 and 95 °F) during the day and is quite stable at around 25 °C (77 °F) at night.

Streams and rivers do not exist in Nauru. Water is gathered from roof catchment systems. Water is brought to Nauru as ballast on ships returning for loads of phosphate.

Nauru Was Once The Wealthiest State In The World

The country had the highest GDP in the world during the early 1980s, but by 2017 it was ranked among the poorest nations. Nauru's economy depended on phosphate deposits, which originated from seabird droppings. The state had the world's highest income per person by 1975 when Nauru's economy earned approximately $2.5 billion. This high income made it possible for the government to stop collecting taxes and provide numerous essential services like education, transportation, and healthcare for free. The government used to pay medical fees for their citizens who needed treatment in Australia, with their housing being less than five dollars per month. The state saved a percentage of their earnings from the phosphates sales in the Nauru-Phosphate Royalty trust, which had about A$1.3 billion in 1991. Nauru's economic downfall began when the phosphate mines became depleted. The country had the biggest phosphate deposits in the South Pacific, but due to their excessive mining activities, the mines were declared economically unviable in 2011. With no other source of income, the government turned to its Nauru-Phosphate Royalty trust. Due to some bad investments, the funds decreased to A$138 million by 2002. Nauru's GDP per capita ranked fifty-first globally in 2013.

Nauru Is The Fattest State In The World

Over 71% of the country’s population is obese, and the only island which tops Nauru is American Samoa (a US territory) placing Nauru as the world's fattest country. Obesity is a problem affecting most of the Pacific states, including Kiribati, Palau, Samoa, and Tonga. Numerous people have claimed that locals are genetically predisposed to gaining weight.

Nauru Was Once A Pleasant Island

Although the country receives less than 200 tourists annually, Nauru was once a pleasant place. British whaler John Fearn was the first westerner to visit the state in 1798, and described it as a beautiful island. The island is surrounded by coral reef, which makes it an excellent place for snorkeling and diving. The marine life was largely destroyed out by phosphate mining.

Nauru Has Never Won A Medal In The Olympics

Weightlifting is the national sport in Nauru, and the country has won nine bronze, ten silver and ten gold medals in the Commonwealth Games. The only other sport that Nauru has competed in internationally is judo. The country's ten Commonwealth Games medals put them ahead of Hong Kong, Sri Lanka, and Zimbabwe. However, Nauru has never won an Olympic medal, despite participating in the Summer Olympic Games since 1996.

Nauru Was A Tax Haven During The 1990s

Nauru became a tax haven in the 1990s and offered passports for foreigners for a fee. Anyone could set up a licensed bank account in the country for only $25,000, with no other requirements during the 1990s. The country's loose banking laws made it possible for foreigners to set up shell accounts in Nauru, thus making it possible for people to launder money. The state had over four hundred registered shell banks which only existed on paper. The Russian mafia managed to launder over $70 billion through Nauru. The FAFT (Financial Action Task Force) listed Nauru among the fifteen uncooperative states in terms of money laundering. Nauru finally introduced anti-avoidance regulation in 2003, which caused the foreign funds to leave the country. The non-cooperative label was lifted in October 2005.

Nauru Has No Armed Forces

The Government Does Not Collect Personal Taxes

A majority of Nauru's population relied on the phosphate mines for employment, and therefore many were left jobless after most of the mines closed. The unemployment rate in Nauru is over 90%, and therefore the government does not collect taxes. Tourism is not an option since the country receives less than two hundred tourists annually. The leading employer in the island is the government, and with no other source of income, Nauru depends heavily on external assistance.

Over 90% Of Nauru Has No Topsoil

Phosphate mining has destroyed over 90% of the island and a large percentage of the island no longer has topsoil. The only fertile place in Nauru is a coastal strip where coconuts flourished. The government announced in 2000 that they planned to rehabilitate the entire island, although the project will take more than twenty years and cost over three hundred million dollars. 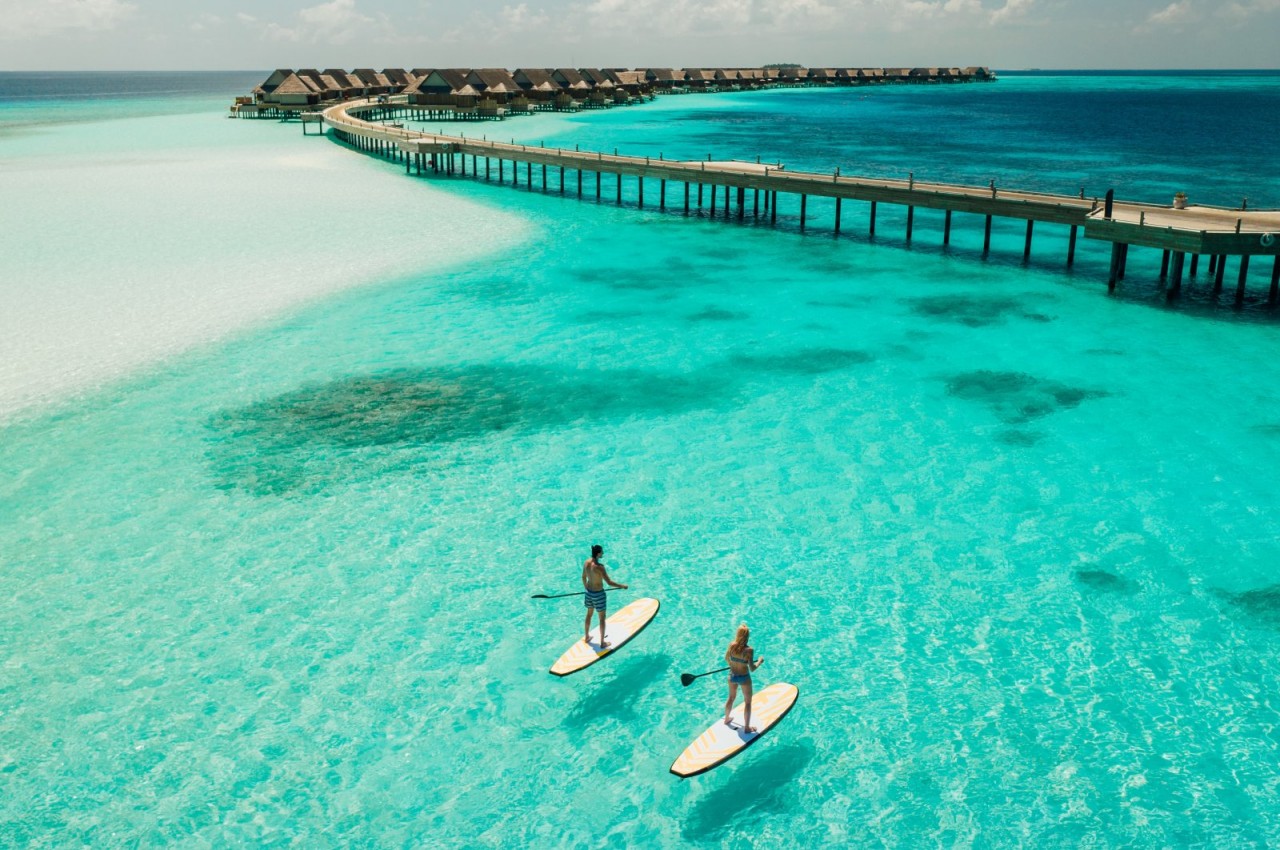 With Valentine coming close, it is the perfect time for you to plan a wonderful trip for your loved ones to one of these most romantic tourist destinations around the world.
February 12, 2022 | 07:56