We visited the doctor as he was about to leave for a trip to Cambodia to treat an elephant. “I have only 30 minutes. I’m in a hurry,” Long said.

In Lak Commune in the Central Highlands province of Dak Lak, elephant doctor Dang Dang Long is fighting a desperate battle to not only keep overworked beasts alive, but to provide the right conditions for them to mate so that they do not die out.

For the giant beasts that have become ill, 30 minutes can save their lives.

“I’m actually a normal herbal doctor and hold no secrets,” he said. “I have many years of experience caring for my herd of elephants and I have drawn some experience in treating them. I inherited knowledge from my father as well.

“In the past, when elephants were sick, they were often released back into the forest. The sick elephants would seek leaves and herbs to treat themselves. But now forests have been largely destroyed; there are few medicinal plants left,” Long added.

Long said elephants were big animals that were generally in good health. Most of their diseases are caused by working too hard and carrying loads that are far too big.

“In recent years, elephants tend to have more tumours in their bodies. The tumours stem from polluted food and water, which leads to lack of nutrition and resistance in their bodies,” he added.

Long often uses the bark of lộc vừng (fish poison tree or barringtonia), and leaves of trâm (Jamblon or syzygium cumini) and some salt boiled to rinse off the injured areas. After sterilising the injury, Long uses soil taken from the nest of termites or fermented rice to cover the open injury.

“Both substances have antibiotic functions and kill parasites and work very well for elephants with tumours,” Long said.

Few months ago, a 40-year-old elephant was brought to him with a rather long open injury on his back. The festering wound was infected with parasites making a nest inside.

“I sterilised the wound, covered it with herbal medicine for nearly a month until it dried and healed,” he said. “That elephant was a little old. Younger ones recover more quickly, just 10 days.”

Although he treats elephants using traditional techniques, Long said when performing surgery, all tools must be sterilised.

“After the operation, it is difficult to stitch an injury because of the thick skin. I often insert herbs and pills in the injuries and wipe away insects,” he said.

Long is also known as a good match maker for elephants, although few couples can give birth to babies. 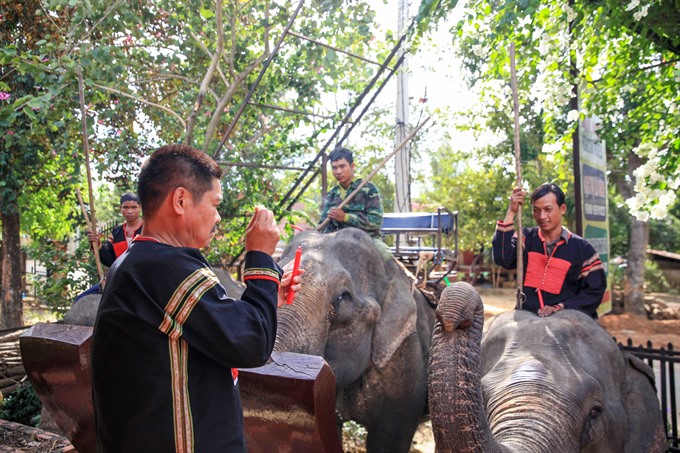 Tradition: Đàng Đăng Long puts a candle near an elephant to increase its wisdom.

According to Long and other elephant raisers in the region, elephants can only mate and conceive in their natural environment.

However, at present there are few natural forests. Elephants have lost their relevant space for mating and giving birth.

“Many elephant couples I match seem to love each other and they mate, but none conceive,” he said.

During mating season, male elephants always have a strong desire but few females accept the males.

Long recalled an incident three years ago, when he matched a couple. They loved each other but broke up at the final stage.

“When they were about to make love, they discovered some tourists filming them,” he said, “They were extremely angry; they chased the tourists and damaged the surrounding fields.”

While Long has inherited priceless herbal techniques to treat elephants, he admitted that what was also needed was a well-educated team of veterinary doctors,” he said, “I just cure in emergency cases.”

There are no centres or sanctuaries specialising in the treatment of elephants.

“At the Dak Lak Elephant Preservation Centre, there are more than 10 staff members, but not one of them has had special training. They just work based on their long-term experience in keeping elephants,” he said.

Elephants owners can get VNĐ400 million (US$17,800) from local authorities for a new-born baby elephant.

“Don Village used to have many elephants, but not all can give birth to a baby,” he said, “Only two to three out of every 10 elephants can.”

According to Nguyen Duc Truong from Don Village Tourism Centre, elephants are on the decline because not only do they lack proper space for mating but also most are of a high age.

“Each mating season, the owners have to take male elephants to the forest so that they cannot damage surrounding fields or houses,” he said.

Y Linh, elder head of the village, used to remind his villagers to create an open space with lots of wild trees for elephants to mate.
Chia sẻ
Tweet Email Print