K-pop continues to dominate the conversation on Twitter globally, even during unprecedented times. Fans turn to Twitter to connect with their favorite K-pop artists and the #KpopTwitter community around the world.
Twitter, Inc.
July 30, 2021 | 08:00

SEOUL, SOUTH KOREA - Media OutReach - 30 July 2021 - K-pop continues to dominate the conversation on Twitter globally, even during unprecedented times. Fans turn to Twitter to connect with their favorite K-pop artists and the #KpopTwitter community around the world. In the recent year between the period from July 1, 2020 to June 30, 2021, there were 7.5 billion Tweets about K-pop, setting yet another record for the most number of Tweets annually related to K-pop. 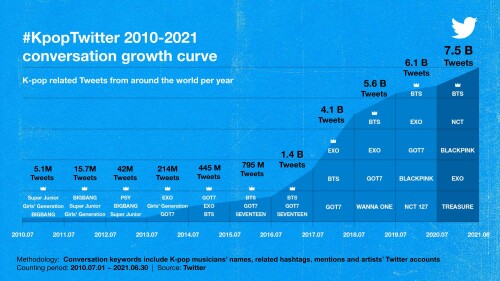 K-pop conversations around the world: Countries Tweeting the most about K-pop

Passionate and vibrant #KpopTwitter conversations continue to reverberate around the world as K-pop fans connect with each other. Indonesia, the Philippines, Thailand, South Korea, and the United States are the top countries with the highest number of K-pop related Tweets. 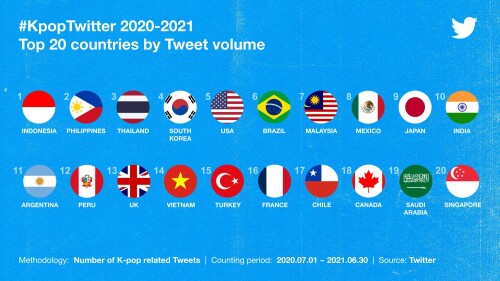 K-pop popularity continues to grow: Countries with the most K-pop fans on Twitter

From Asia Pacific to South America, the global K-pop fanbase continues to grow on Twitter. Peru and Colombia join the top 20 countries list with the most number of people Tweeting about K-pop. 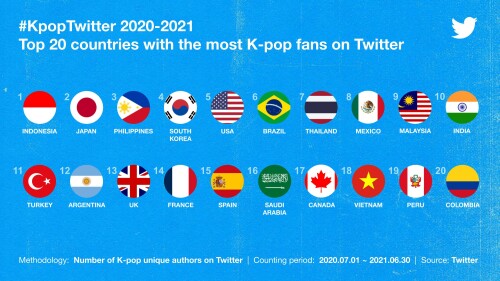 Introducing the most discussed K-pop artists

For the first time, we are announcing the top 20 most talked about K-pop artists so that fans can celebrate their favorite artists on Twitter. BTS (@BTS_twt), NCT (@NCTsmtown), BLACKPINK (@BLACKPINK), and EXO (@weareoneEXO) are among the most discussed groups. 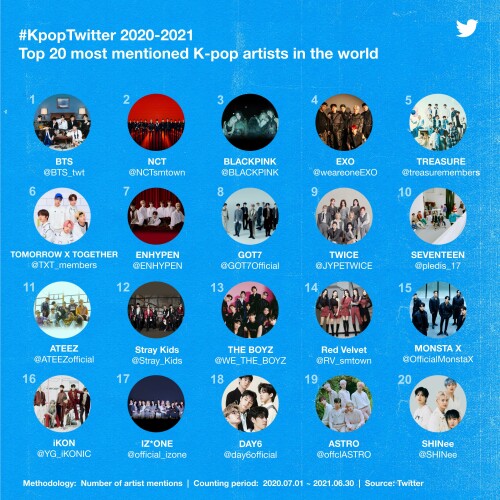 #TwitterBlueroom continues to connect fans globally to their favorite K-pop artists by bringing exclusive interviews and Q&A sessions for them to get closer to their idols. From 2PM (@follow_2PM), a second-generation K-pop group with a comeback after five years, to third-generation Kpop groups like DAY6 (@day6official) and iKON (@YG_iKONIC), artists and K-culture leaders engaged with their fans in real time on #TwitterBlueroom. ITZY (@ITZYofficial), one of the hottest K-pop girl groups, hosted a LIVE Q&A with over one million viewers while JUSTB (@JUSTB_Official), who just debuted last month, did so via a showcase live-streamed on #TwitterBlueroom, bringing fans from all over the world together virtually.

YeonJeong Kim, Head of Global K-pop Partnerships at Twitter, said, "Whether they are global powerhouses or emerging stars, K-pop fans are talking about and engaging with their favourite artists regularly on #KpopTwitter. Culturally, we have seen the phenomenal rise of K-pop across the world, but this trend is not new on Twitter as we have experienced the growth in conversation first-hand. We will continue to work with artists and their labels to bring more content for the K-pop community."

In 2021, K-pop is bigger than ever – there is always something happening on #KpopTwitter, from #TwitterSpaces to #TwitterBlueroom, and more. If you missed an event, catch up on what has happened on the Twitter blog. Here are some of the top moments from 2021 so far:

● Kpop Generation Analysis: BTS set an example for the 4th gen on Twitter

● 3 of the top 5 most listened-to Twitter Spaces are K-pop artists (GOT7 Bambam, NCT, TWICE)

Join the #KpopTwitter conversation with other fans and your favorite K-pop idols today!

Twitter is what's happening and what people are talking about right now. To learn more, visit