Today, November 8, the weather of Hanoi gets colder as a cold spell has hit the North of Vietnam.

Today, November 8, the weather of Hanoi gets colder and dryer, as a cold spell has hit the North of Vietnam.

Hanoi and other localities in the Gulf of Tokin have been experiencing strong winds, temperature ranging from 19 to 25 celsius degree, humidity 70-75%.

Heavy rains and thunderstorms are likely to happen in many northern and central localities until November 9. 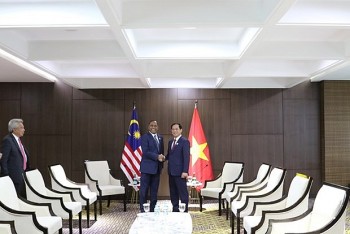 Foreign Minister Bui Thanh Son had short meetings with his counterparts to discuss ways to strengthen bilateral relations on the sideslines of the 32nd ASEAN Coordinating Council Meeting and the ASEAN Foreign Ministers’ (AMM) Retreat in Jakarta, Indonesia.
14:48 | 05/02/2023