Rapper Tekashi 6ix9ine is releasing a new song and video created during his home confinement just weeks after being freed from prison over coronavirus scares.
VNT
May 09, 2020 | 19:45

In his first post-prison track "Gooba," Tekashi 6ix9ine - whose real name is Daniel Hernandez - flaunted his jaw-dropping performance accompanied by six women and a puppy.

Of course, viewers are not the same as supporters, but still, that’s pretty impressive. And Hernandez thought so too.

Earlier on Friday, Tekashi advertisements were seen in Times Square.

Chances of 6ix9ine dropping a visual is pretty likely as he received permission from a judge last month to film a video in his backyard while he is on home confinement. Shortly after Tekashi received the green light from the judge, he hinted at his comeback.

Meanwhile, TMZ reported on Monday (May 4) that due to coronavirus quarantine restrictions, 6ix9ine might be the only person in his music video. The outlet claimed that Tekashi's security was going to be behind the camera while 6ix9ine directed the visual. The rapper might have recruited another rapper for the video, but they would have been responsible for filming their own content.

Tekashi, who celebrates his 24th birthday today, received a compassionate release from prison last month ahead of his scheduled sentence due to coronavirus concerns.

Capping off that splashy return, the musician dropped a music video for a new song, ‘Gooba’. Within mere hours of going up, the clip had racked up almost 13 million views.

Quickly, he became the source of much mockery online, with thousands making memes out of his livestream and its endless brags.

Tekashi 6ix9ine was sentenced late last year on charges related to gang activity in New York, but received a reduced sentence for his cooperation.

Tekashi was sentenced in December to two years in prison on racketeering, firearms and drug trafficking charges.

The US District Judge Paul freed the rapper on April 2, calling him to serve the last four months of his two-year sentence at an undisclosed location.

Lance Lazzaro, his defense attorney, said at the time that the rapper's "severe asthma" made him vulnerable to the novel coronavirus. Tekashi 6ix9ine is serving the remainder of his sentence at home.

"Dummy Boy," his debut record, was released in late November, after he was taken into custody.

The Hip Hop community shames rats and Tekashi is one of the infamous ones.

Hernandez recently joked about his reputation as a “snitch” on social media. The star commented on an Instagram post about Los Angeles mayor Eric Garcetti offering rewards to citizens who “snitch” on businesses violating the city’s the stay-at-home order, saying he was “coming to the rescue”. 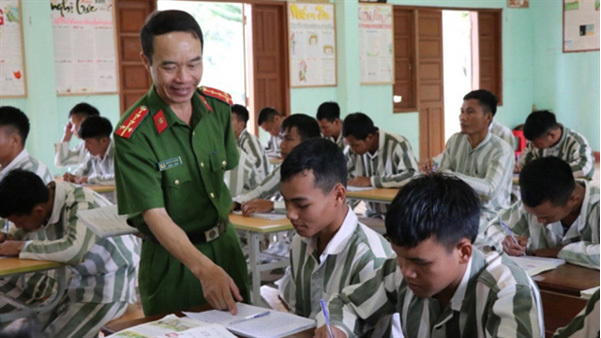 Job done by police officers working as superintendents in prisons is not only to look after the prisoners, but also do the task of educating and sensing to awaken prisoners' conscience, helping them for positive changes to get peace in mind, and have positive motivation to study, work to return to family and normal life soon.
December 30, 2020 | 10:12