One of the priorities of Vietnam when joining the United Nations Security Council (UNSC) is the adherence to the UN Charter, according to Deputy Prime Minister and Foreign Minister Pham Binh Minh. 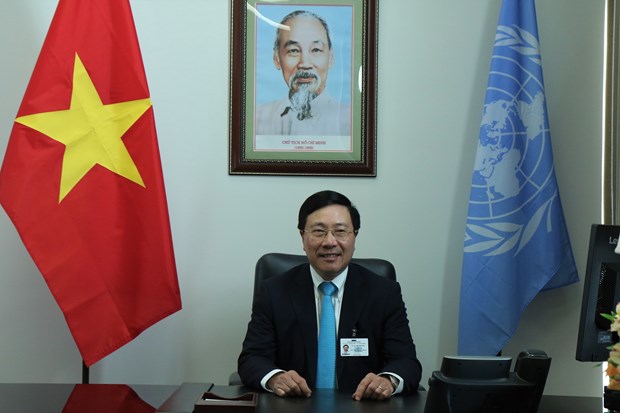 In a recent interview granted to the Vietnam News Agency, Minh said the ministerial-level open debate of the UNSC held in New York on January 9 under the theme: adhering to the UN Charter to maintain international peace and security is the proposal of Vietnam.

This initiative came at the right time on the occasion of the 75th anniversary of the UN and the UN Charter, he added.

Secondly, this theme was raised at a time when many issues are taking place in the world, especially conflicts and threats in multiple places, including matters related to the adherence to the UN Charter.

Therefore, this topic attracted a great deal of attention from all UN member states, Minh said, adding that more than 110 countries registered to deliver speeches at the event, the largest number so far in an open debate of the UNSC.

One more thing is that at the debate, the UNSC adopted a particular statement on the UN Charter for the first time. This demonstrates the importance and the success of the debate, an initiative of Vietnam right from the first month of its non-permanent membership to the UNSC, and the month of the UNSC chairmanship.

According to Minh, Vietnam set its own priorities when participating in the UNSC, which are in line with the common priorities of the UNSC as well as the UN members.

Besides prioritising to adhere to the UN Charter, Vietnam will focus on preventing conflicts, protecting civilians, women and children from conflicts, and addressing conflict consequences such as bomb and mine clearance, Minh said, adding that Vietnam has experience in these fields.

Another issue that Vietnam will give priority to is coping with climate change related to peace and security, Minh said.

As a non-permanent member of the UNSC for the second time (the first in 2008-2029), Vietnam hopes to share its experience in addressing war consequences and developing the country as well as make contributions to reconciliation for countries in the region and the world such as Africa and Asia in its capability, he added./.

Vietnam attaches great importance to the universal goal of decolonisation