The executive committee of the Vietnamese association in the Czech Republic held a meeting in Prague on December 3 to map out action plans for 2020 and discuss preparations for the 70th anniversary of the two countries’ diplomatic ties (1950 – 2020).

The executive committee of the Vietnamese association in the Czech Republic meets on December 4 to plan preparations for the 70th anniversary of bilateral diplomatic ties next year. (Photo: VNA)

In the next few months, the association’s executive committee will support Vietnamese people living in the European country to have a merry Christmas and Lunar New Year and commemorate the death anniversary of the Hung Kings, said its first vice president Giang Thanh.

It will also coordinate with the Embassy of Vietnam to organise celebrations for the 70th anniversary of bilateral diplomatic ties next year in a bid to promote Vietnamese culture and enhance friendship between the two peoples, he said.

Vietnamese Ambassador Ho Minh Tuan said next year will see many major events between the two countries. Czech Prime Minister Andrei Babis will visit Vietnam in 2020 while the Vietnam-Czech Inter-Governmental Committee’s meeting is scheduled in Prague.

The embassy has suggested the Ministry of Culture, Sports and Tourism host a Vietnam Culture Week in the Czech Republic next year, he added.

Currently, the Czech Republic is a major trade partner of Vietnam in Europe with two-way trade reaching 307 million USD in 2018, up 16 percent over the previous year.

About 70,000 Vietnamese people are living in the Czech Republic, forming a recognised ethnic minority group in the country./. 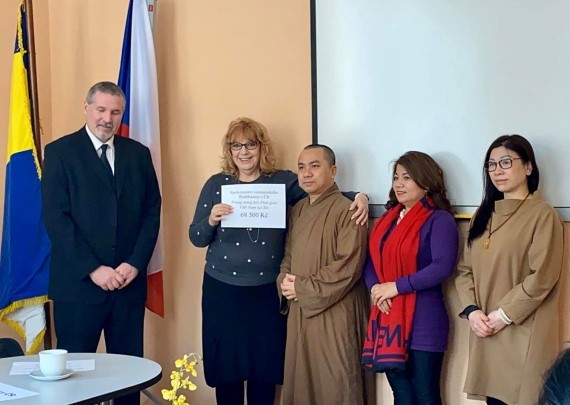 Representatives of Vietnamese associations and societies in the Czech Republic on February 7 handed nearly 252,100 koruna (about 10,000 EUR) over to the administration of Vejprty to help victims of a fire at the support centre for the handicapped in the city.
February 08, 2020 | 18:49