A ceremony was held in the central city of Da Nang on January 13 to kick off a series of workshops and forums on economic, labour and tourism cooperation between Vietnam and Japan. 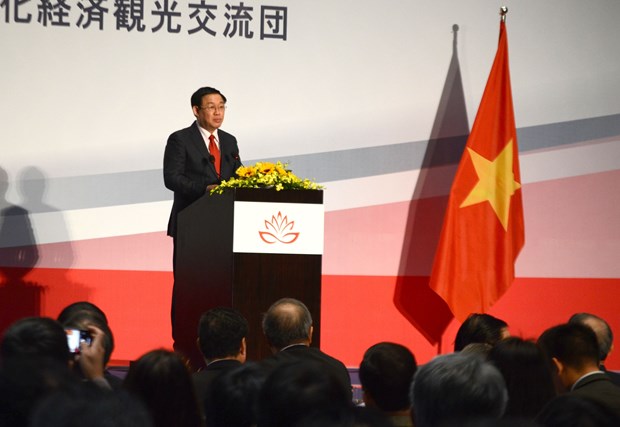 Deputy Prime Minister Vuong Dinh Hue speaks at the ceremony that kicks of a series of event between Vietnam and Japan in Da Nang city on January 13 (Photo: VNA)

Addressing about 800 delegates of both countries at the ceremony, Deputy Prime Minister Vuong Dinh Hue welcomed the largest-ever Japanese delegation attending an exchange programme so far, noting that this time’s programme takes place amid the thriving Vietnam-Japan extensive strategic partnership.

He held that the two countries now have great opportunities to further enhance cooperation, including in development strategy, production capacity and human resource training.

The Vietnamese Government has been making unceasing efforts to improve the investment and business climate and create favourable conditions for Japanese firms to invest in Vietnam, he noted.

Hue also stressed that the workshops and forums held this time are occasions for relevant agencies, localities, organisations and businesses to seek concrete measures for boosting the two economies’ connectivity, thereby opening up new cooperation chances and fostering substantive links.

The Deputy PM expressed his belief that in the time ahead, the two sides will jointly tighten their cohesion and connectivity; beef up economic, investment and trade partnerships so that Japan will become the leading investor in Vietnam; and foster labour cooperation. Besides, they will also increase people-to-people exchange, tourism connections and locality-to-locality ties to strengthen the two peoples’ mutual understanding.

For his part, Nikai Toshihiro, Secretary-General of the Liberal Democratic Party of Japan and Chairman of the Japan-Vietnam Friendship Parliamentary Alliance, said bilateral relations have been increasingly tightened in recent years, especially in the fields of investment, labour and tourism.

As the Japanese delegation consists of nearly 1,000 members from many prefectures and cities, he said he hopes through this series of events, localities and businesses of the countries will form many partnerships, and participants will better understand the two Governments’ policies, regulations and incentives so as to boost cooperation in the future.

In 2020, the low-cost carrier will open five new routes from Hanoi, Ho Chi Minh City and Da Nang city to Nagoya, Fukuoka and Kagoshima of Japan, raising the number of its routes linking the two countries to 10./.