Former governor of Gyeongsangbuk province of the Republic of Korea (RoK) Kim Kwan-yong on January 10 was honoured with the third-class Labour Order of Vietnam. 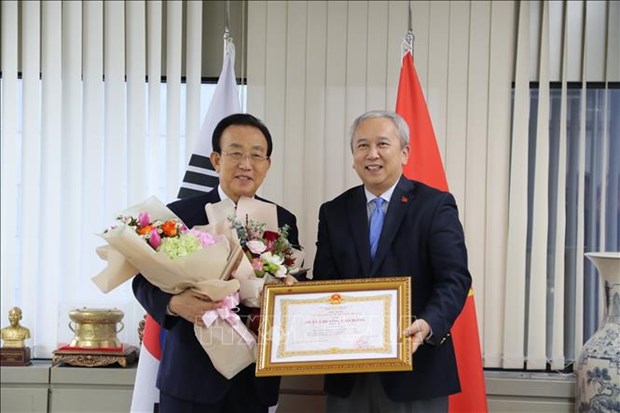 On behalf of the President, Ambassador to the RoK Nguyen Vu Tu presented the order to Kim Kwan-yong at a ceremony in Seoul.

The honour is in recognition of his contributions to the successful organisation of the 2017 Ho Chi Minh City-Gyeongju World Culture Festival in particular and the development of the friendship and cooperation between the city and the province in general.

Speaking at the ceremony, the diplomat said the Vietnam-RoK relations have enjoyed fast development and been strengthened over the years with stronger cooperation and exchanges in multiple fields.

He noted that cultural exchanges have been a highlight of the bilateral ties, manifested by the 23-day HCM City-Gyeongju World Culture Festival in November 2017, the longest cultural event hosted by the Vietnamese city.

Tu voiced his belief that the success of the festival will serve as a driving force for the two peoples to join hands and further contribute to the bilateral development and cultural exchanges, as well as other spheres.

For his part, Kim expressed his hope the bilateral relations will continue to thrive, and that the RoK and Vietnam will nurture close relations in economy, trade and culture./.