(VNF) - While sightseeing in the Cat Ba National Park, Mr. Werner away from the team, getting lost in the forest. After 6 hours of panic, he was rescued in the state of being exhausted.

(VNF) - While sightseeing in the Cat Ba National Park, Mr. Werner got lost from the team, going deep into the forest. After 6 hours of panic, he was rescued in the state of being exhausted.

Mr. Werner and his family send thanks to Cat Hai district police

Earlier, at about 21 pm on November 16, Cat Hai district police were reported on the case of a German visitor getting lost in the Cat Ba National Park from the evening of the same day.

The area where the victim got lost is very dangerous.

At 0 am on November 17, the searching team found Mr. Werner at a ravine in a state of exhaustion from hunger, thirst and psychological shock.

At 2:30 am on the same day, Mr. Werner was taken to the center of Cat Ba town safely, and doctor carried out medical care for him.

When he was fully awake, Mr. Werner recalled that, on November 16, he and a group of tourists registered to visit Cat Ba National Forest. While watching the scenery, he lost the team, going deep into the forest. As it was dark, Mr. Werner could not find a way out, not knowing how to contact with people.

After 6 hours of wandering in the forest, Mr. Werner was rescued by the police.

At present, he has fully recovered. 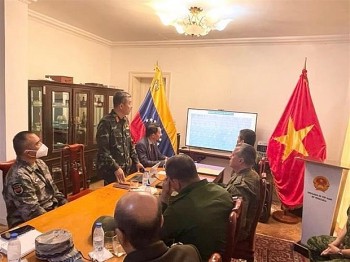 Ha Giang is not only beautiful in the buckwheat flower season, but it is also breathtaking in the romantic cherry blossom season. Around this time, a lot of tourists check in here.
January 31, 2023 | 09:36
Phiên bản di động