The winning design that will be displayed on all activities celebrating diplomatic relations between France and Vietnam, which will take place throughout 2023.
Zoey Nguyễn
nhungnguyenle.1209@gmail.com June 28, 2022 | 09:43

The winning ​ logo design should be simple and playful, but outstanding and unique; must have the colors of the flags of France and Vietnam, among other requirements.

The participants in this contest are students at the junior high and high school levels (up to 18 years old). Contestants can participate by themselves or in groups.

The embassy had received many entries from two French schools in Vietnam to participate in the contest (including Alexandre Yersin School in Hanoi and Marguerite Duras School in Ho Chi Minh City), and Vietnamese students in bilingual programs or in French language programs across the country.

The deadline to enter the contest is extended until July 10.

In 2018, the work designed by middle schooler Reika Firrincieli won the official logo design contest at the occasion of the 45th anniversary of diplomatic relations between Vietnam and France (1973-2018).

"The logo was drawn by a talented 8th grade female student at Hanoi International School. I like this sketch very much because it reflects the spirit of the current good relationship between France and Vietnam: two French-Vietnamese schoolgirls having fun with each other in real life and that is also the spirit and solid foundation in the cooperation relationship between the two countries,", Mr. Jean Baptise LeMoyne, Secretary of State, Ministry of Europe and Foreign Affairs of France praised the winning logo design by Reika Firrincieli.

The two countries will celebrate the 50th anniversary of the bilateral diplomatic relations and the 10th year of their strategic partnership in 2023.

Vietnamese Ambassador to France Dinh Toan Thang at a seminar in Paris on June 23 2022 said that the Vietnam-France economic ties will see strong breakthroughs in the coming time, with more and more French enterprises selecting Vietnam as a destination for investment.

According to the ambassador, France is now Vietnam’s second largest investor among EU countries, pouring more than US $3.6 billion into Vietnam

In particular, the French enterprises wanted to explore Vietnam’s tax rates applicable at industrial parks, the government’s investment incentives for foreign investors, and the country’s strategy and policies for the development of the renewables and the governmental support for foreign companies in new product R&D, startup and innovative projects.

Vietnam's geographical location in the centre of ASEAN makes it very competitive among its peers in the logistics sector, along with the population of 100 million and large workforce attracting foreign enterprises. 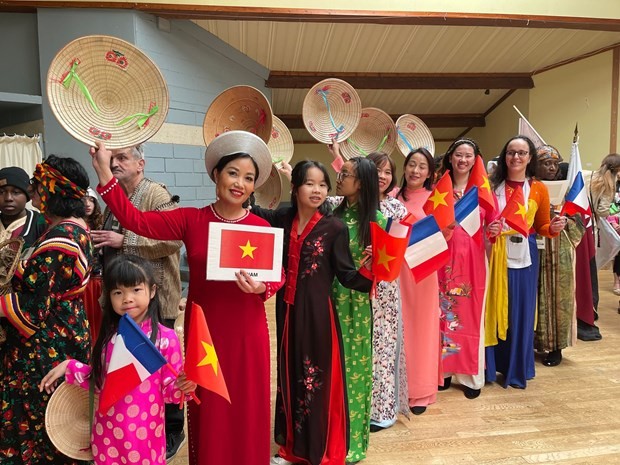 International Francophone Festival in Da Nang city at the same time with he village of Yèbles, in the province of Seine et Marne, Paris brought Vietnamese and French people closer together.
March 23, 2022 | 07:50