Hundreds of fruit container trucks have remained stuck for days at border gates in the northern province of Lang Son, bordering China where millions of people are in lockdown because of the new coronavirus disease (COVID-19). 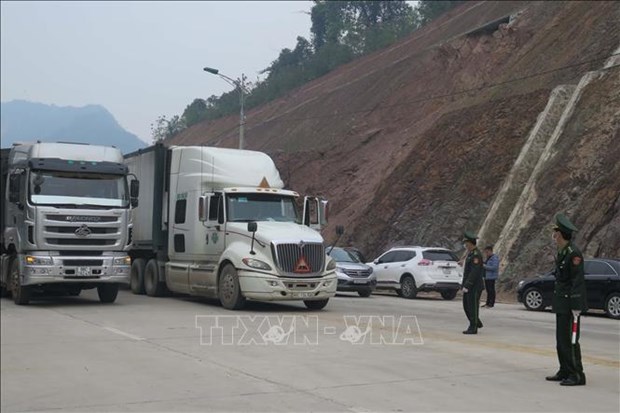 Container trucks are waiting for customs clearance at Tan Than Border Gate in Lang Son province which borders with China. (Photo: VNA)

According to the Ministry of Industry and Trade, as of 12pm on February 23, 171 container trucks loaded with Vietnamese exports of farm produce, fruits, electronic parts and textile and garment have been customs-cleared at the Huu Nghi Border Gate while 365 trucks, mostly with fruits, have been jammed here.

Some 189 trucks containing electronic parts, machines, ceramics, glass products, and textile and garment from China have been let through to Vietnam.

At the Tan Thanh Border Gate, the main gate for transporting fruits to China, 107 trucks loaded mostly with dragon fruit and watermelon, are still queuing for customs clearance to China. Only 13 have been passed through so far.

The backlog was caused by a severe lack of stevedores in the Chinese side to help with cargo loading and unloading and the fact that only official-channel exports are allowed to enter China has reduced the number of trucks cleared, the ministry said.

The Coc Nam and Chi Ma Border Gates have also been in similar situation but with only 14 queuing trucks in total.

On February 22, Vietnamese and Chinese officials have discussed and agreed to keep the Tan Thanh Border Gate open from 7:00 – 19:00 to help fasten the clearance process and reduce congestion.

In Lao Cai, about 200 trucks have been also waiting for customs clearance at the province’s border crossing./.