President Nguyen Xuan Phuc on April 21 stressed that the Vietnam Lawyers Association (VLA) should play a more active role in policy and lawmaking, scientific research in the legal sector, and especially the building and perfection of a rule-of-law socialist state.

Speaking at a working session with representatives from the association, Phuc, who is also head of the Central Steering Committee for Judicial Reform, urged the VLA to improve its operational quality and work harder to polularise guidelines of the Party, as well as policies and laws of the State, thus raising respect for the law and its observance among the public.

The association needs to further contribute to lawyer training, step up international cooperation and take advantage of support from foreign lawyers and friends of Vietnam, he noted.

The President commended the VLA’s proposal to collect feedback from its members on a project developing a strategy for building and perfecting a rule-of-law socialist State till 2030 with orientations to 2045.

Lauding the association’s performance over the years, Phuc said it has effectively implemented people-to-people diplomacy and international cooperation, especially in safeguarding the country’s sovereignty and territorial integrity.

The association should make greater efforts to fulfill its role as an advisor of the Vietnam Fatherland Front in social criticism for legal documents, the leader added.

Established in 1955, the association now has nearly 70,000 members who are both experienced and young lawyers. 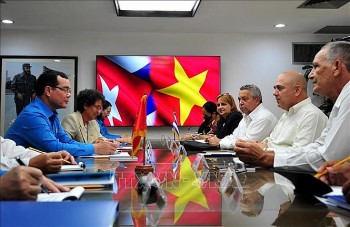 The Party and the State of Cuba received a delegation of the visiting Vietnam General Confederation of Labour in Havana.
12:53 | 04/07/2022