At the conference, Vietnam Deputy Minister of Foreign Affairs Nguyen Quoc Dung highlighted the uniqueness in Vietnam – Thailand relations. Thailand was the only Southeast Asian country President Ho Chi Minh visited when he returned to Vietnam from abroad in 1930. Vietnam and Thailand set up a strategic partnership in 2013, which was upgraded to an intensive strategic partnership in 2015.

The conference highlighted the accomplishments since Vietnam and Thailand established diplomatic relations 45 years ago and discussed potential sectors for cooperation and directions for boosting relations for prosperity and peace between the two countries and the ASEAN region.

Ambassador Blankura said Vietnam and Thailand were partners for sustainable development, stable peace and stable future. The 45th anniversary is a milestone in the relations between both countries.

Addressing the conference, ambassador Chi Thanh expressed his appreciation for the efforts of the previous leaders in developing and cementing the relations between the two countries. The ambassador highlighted that Vietnam and Thailand had cooperated in all aspects in the past 45 years and were now working together to fight against Covid. To move towards recovery, both countries should visualize the bilateral partnership in the next 10 – 20 years and even 45 years, he said.

In economy, Thongphakdi suggested Vietnam and Thailand should boost economy and cooperation for quick and sustainable recovery post-Covid and strengthen both countries’ ability to self-sustain facing future uncertainties. Thailand has approved circular and green economy models as its inclusive growth strategy. For its part, Vietnam is boosting environmentally friendly economic development policies. Thongphakdi said both parties could explore cooperation in these sectors and become a model of cooperation for other ASEAN countries.

In peaceful and sustainable cooperation, both countries are actively enhancing peace and stability in the region, aiming to ensure the Southeast Asian region can prosper in peace.

Discussing future cooperation between Vietnam and Thailand, Thongphakdi highlighted the importance of cementing the friendship and mutual understanding between the young generations of both countries. Thongphakdi underlined the importance of boosting educational and professional exchange and cooperation between Vietnamese and Thai students, young experts and businessmen to elevate the bilateral relations to a new level.

Vietnam Deputy Minister of Foreign Affairs Quoc Dung said, “the establishment of the diplomatic relation in August 1976 is an important milestone for both countries, opening a new era in the friendship and cooperation in different fields. In the past 45 years, this relation has been continuously cementing in breadth and depth. Our relationships are becoming stronger and closer.”

Thailand has the highest and fastest rate of trading investment with Vietnam. From 1995 to 2018, bilateral trade turnover grew 35 times from US$ 0.5 billion to US$ 17.5 billion. Despite Covid, trade between the two countries reached nearly US$ 16 billion in 2019, accounting for 30% of Vietnam’s trade values with other ASEAN countries. Vietnam and Thailand’s people-to-people relations prosper, becoming a bridge to connect the two peoples.

Both countries also work closely in bilateral and multilateral relations to enhance the central role of ASEAN. Vietnam and Thailand are striving to cooperate in long-term adaptive capacity building and Covid control to address vaccine issues, heading towards sustainable economic recovery.

In the first session of the conference, the speakers underlined the importance of people-to-people relations to the friendship between both countries. Former Ambassador of Thailand to Vietnam Anuson Chivanno (2011-2013) emphasized that people-to-people relation between Thailand and Vietnam should be strengthened in the next 5 years as both countries are heading towards the 50th anniversary of the bilateral relations, particularly in developing friendship associations, cultural and educational exchange and language training.

Meanwhile, former Ambassador of Vietnam to Thailand Nguyen Duy Hung (2006-2010) noted that the contributions of the Thai Vietnamese community had boosted the relationships between the two countries for economic and cultural development, thereby deepening mutual understanding.

In the second session that focused on intensive strategic partnership, former Ambassador of Thailand to Vietnam Tanee Sangrat (2008-2013) said Vietnam had a vital role in developing a balanced Southeast Asian region for its experience in fostering long-term and successful relations with great powers in the region and globally. As Vietnam had close relations with other Southeast Asian countries, it contributed significantly to narrowing the gaps between countries in the region.

President of Thailand’s Chamber of Commerce Sanan Angubolkul said Vietnam and Thailand aimed to achieve US$ 25 billion in bilateral trade cooperation by 2025. To achieve this goal, both countries should develop timely and practical activities that are easy to implement.

Angubolkul praised Vietnam’s support for Thailand and expressed his willingness to assist Vietnam in transferring knowledge and technologies and connecting businesses. The conference participants also discussed other areas for cooperation such as agriculture, social sciences, and language training. 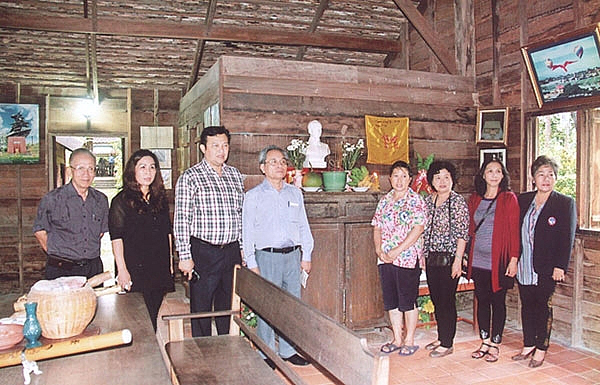