According to the General Statistics Office, GDP in 9 months of 2022 increased by 8.83% over the same period last year, the highest increase of 9 months in the period 2011-2022. This shows that production and business activities have grown again, the Government's policy of socio-economic recovery and development has been effective.

According to experts, this is one of the important factors determining the attractiveness of Vietnam's industry to foreign investment.

According to the latest report from Savills Vietnam, there are currently 5 other factors affecting the performance of Vietnam's industry.

First of all, the policy of opening borders was applied early, creating favorable conditions for businesses to come and work in Vietnam. Meanwhile, neighboring China still maintains a zero Covid policy. This strengthens the wave of international businesses moving to countries in Southeast Asia, especially Vietnam.

Not only benefiting from that wave, our country's potential also lies in free trade agreements, typically the EVFTA, which has helped Vietnam attract more investors from Europe.

Another factor that is contributing to creating a safe investment environment comes from the stability of the VND/USD exchange rate, compared to the exchange rate in some countries in the region such as Indonesia, Thailand, India and Malaysia.

The Vietnamese government is also introducing policies to stimulate tourism demand to promote business activities, rentals, and complete investment procedures. Moreover, foreign investors also benefit from the policy of reducing corporate income tax to 0% in the first 4 years of operation and reducing 50% in the next 5 years.

The government also helps businesses attract workers through Decrees supporting workers to own social housing in industrial zones. The Decree effectively makes use of Vietnam's advantages in terms of an abundant labor force.

Despite challenges from the global trade slowdown, Matthew Powell, head of Savills Hanoi said that Vietnam's industry is still in a favorable position to attract foreign investment flows.

The proof is that industrial real estate areas still have high operating capacity, many potentially new projects are implemented.

According to the Industrial Insider Report published by Savills Vietnam in September, the supply of industrial real estate in two big cities, Hanoi and Ho Chi Minh City has been almost completely filled.

With advantages in infrastructure and transportation, industrial land in these two areas is more competitive, pushing rents higher.

Meanwhile, neighboring provinces still have vacant projects and at softer prices, promising to be an alternative option for many investors.

Facing the industrial wave entering Vietnam, the Government has set out development directions and supplement the supply of real estate across the country.

In the first 6 months of 2022, the Deputy Prime Minister approved 9 new industrial parks that will be put into operation in 2023-2025, with a total area of 2,472 ha and total investment capital up to 29.4 thousand billions dong.

In Hanoi, the City People's Committee has approved a project to establish 2-5 industrial parks from 2021 to 2025 in Soc Son, Dong Anh, Bac Thuong Tin, Phu Nghia and Phung Hiep.

According to the head of Savills Hanoi, the shortage of supply in big cities is both a challenge and an opportunity. The almost absolute occupancy rate and high cost have reflected the level and investment demand of international businesses in Vietnam.

The participation of foreign investors and businesses, such as LEGO Group from Denmark or YSL from the RoK, is raising the level of quality and standards of industrial parks in Vietnam. 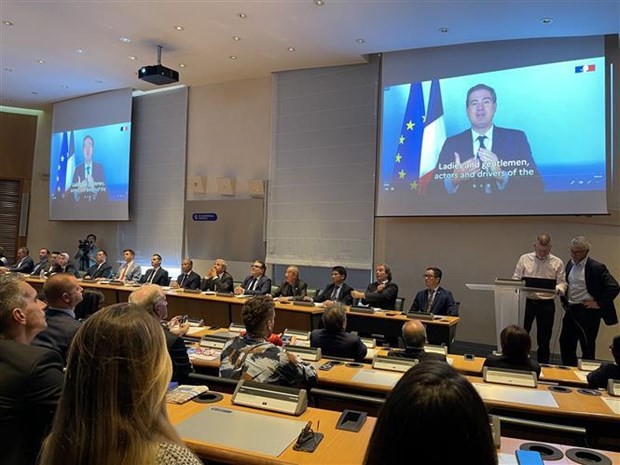 Marseille's businesses are looking forward to having new investment projects with Vietnamese partners in 2023.
October 13, 2022 | 08:34