The Military Command of Dien Bien Phu city in the northwestern province of Dien Bien on March 7 successfully deactivated more than 300kg of ammunitions and explosives unearthed in the relic site of the Dien Bien Phu stronghold. 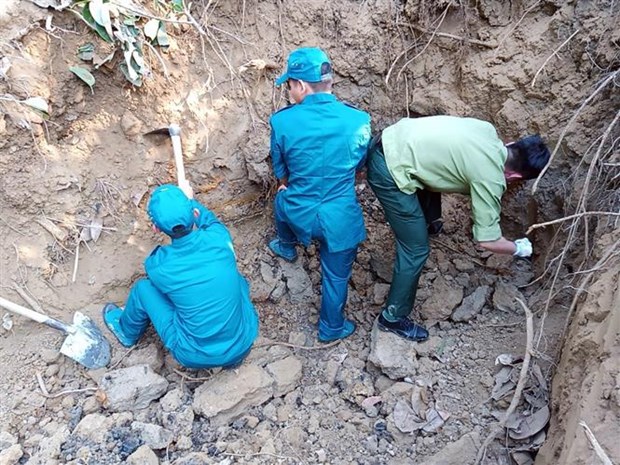 While digging holes for planting trees at the site on March 4, workers unearthed an amount of ammunitions and explosives left over by the war, including 150-mm shells, grenades and mortar shells.

Upon receiving the information, the command joined hands with other forces of the province in the search for more unexploded ordnances (UXOs) at the site.

Lt. Col. Do Quoc Hung, Deputy Commander of the Command, said they were left from the resistance war against the French and used for the Dien Bien Phu campaign.

The UXOs were removed from the residential area and successfully deactivated.

According to the Ministry of Labour, Invalids and Social Affairs, Vietnam is one of countries most contaminated with UXOs.

It is estimated that about 800,000 tonnes of UXOs were left across the country after the war ended in 1975, mostly in the central region. Some 6.13 million hectares of land are polluted with or suspected of being polluted with UXOs, accounting for 18.82 percent of the country’s total area.

Since 1975, UXO incidents have killed more than 40,000 people and injured 60,000 others, most of whom were breadwinners of their families or children./.

A large number of UXOs found in Quang Tri

Over 420 officers, soldiers in Quang Ninh get prioritized Covid-19 vaccine

NTUC LearningHub Survey: Despite More Employers Seeing the Importance in Training in the Wake Of Covid-19, Not Enough Is Being Done to Upskill Workers