Head of the Party Central Committee’s Economic Commission Nguyen Van Binh hosted a reception in Hanoi on February 25 for US Deputy Assistant Secretary of the Treasury for Asia Robert Kaproth. 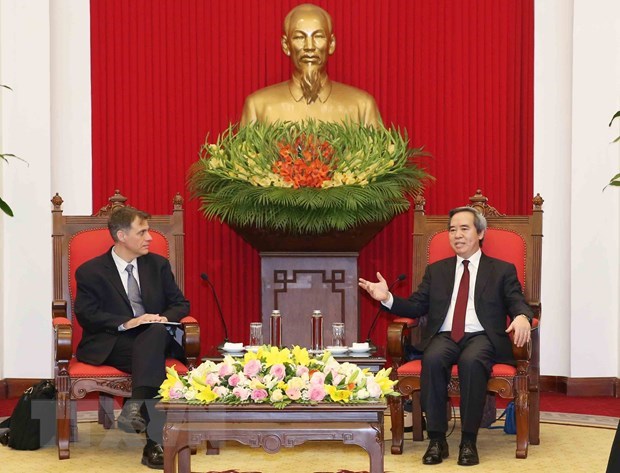 Binh expressed his delight at the substantial and effective development of Vietnam – US comprehensive partnership over the past years, especially in the context of the 25th anniversary of the normalisation of bilateral diplomatic ties this year.

The Party and State of Vietnam treasure the relationship with the US and want to foster the bilateral comprehensive partnership between the two countries, with economic and trade ties as an important pillar, he said.

The Party official added that Vietnam has directed competent agencies to regularly review the trade and investment ties with the US, with a view to promptly clearing obstacles and arising issues, including the trade deficit and market access, and creating more favourable conditions for US investors to do business in Vietnam.

According to him, Vietnam is actively considering the possibility of stepping up cooperation projects with the US, including those in energy field.

The host also welcomed the US’s initiatives on regional cooperation in energy, science-technology, infrastructure, thereby attracting more US investment in Vietnam and facilitating Vietnam’s imports from the US.

Kaproth, for his part, said he is impressed by Vietnam’s achievements in economic development over the past years.

He also pledged to continue working closely with the Vietnamese Party and Government to strengthen Vietnam – US ties./.

Tags: US Deputy Assistant Secretary of Treasury Vietnam - US

Former US Defense Secretary shared memories of Vietnam throughout his life

Vietnam - US trade turnover increased by nearly 170 times since 1994