Memorandums of understanding (MoU) on student exchange were recently signed by Far Eastern Federal University (FEFU) and the University of Da Nang.

The corresponding documents were signed at the meeting by FEFU Vice-President for International Relations Victoria Panova and the Vice-President of the University of Da Nang Le Quan Son.

Within the framework of the agreement, the universities plan to implement academic mobility programs and promote the development of student exchanges. The parties also expressed hope for further deepening of relations in the field of joint educational programs and scientific research.

“FEFU was founded in 1899 primarily as a university specializing in oriental studies, and in this area, it still maintains a leading position in Russia. Vietnamese Studies are one of the most developed areas: every year dozens of students choose to study this country as a specialty. We should definitely not stop on the agreements reached. We should consider them as an opportunity for further strengthening our relations and cooperation”, noted Panova.

During the meeting, representatives of universities considered the prospects for the development of double degree programs in such areas as international relations, regional studies, digital linguistics, study and teaching of Russian as a foreign language.

Also in the plans for bilateral cooperation is the training of Vietnamese specialists in the field of tourism and hospitality with knowledge of the Russian language - colleagues propose to send bachelors who graduated from the department of Russian studies in Da Nang to the magistracy of the FEFU School of Economics and Management.

The University of Da Nang is one of the strongest research centers and the best higher education institutions in Vietnam. Since 2012, FEFU and Da Nang University have interacted in the areas of academic mobility and joint educational programs. In 2017, the cooperation agreement expired, but with the active support of the Consulate General of the Russian Federation in Da Nang, relations between the universities resumed.

Consul General of Russia in Da Nang Plam Andrey Yurievich highly rated Russian Studies in Da Nang University, noting that he's happy to see how the Russian language faculty in Da Nang is developing rapidly, interest in Russian culture is growing and the number of students is increasing every year.

"Cooperation between our countries in the field of education and personnel training, namely the annual increase in the number of quotas for training in Russia for Vietnamese candidates, also contributes to the interest in learning the Russian language”, said Plam.

The agreement was signed coincided with Vietnamese Minister of Foreign Affairs Bui Thanh Son’s official visit to Russia from Sep. 25 to 28, the first trip to Russia since he took office in April.

In his talks with his Russian counterpart Sergei Lavrov in Moscow on the same day, Son called on the Foreign Ministry and relevant agencies of Russia to continue creating favourable conditions for Vietnamese people to live, study, and work in the country, as well as to receive Covid-19 vaccination and treatment.

In response, Minister Lavrov stressed that Vietnam is an important market of Russia in Southeast Asia, voicing his support for the Vietnamese counterpart's proposals and suggesting stronger cultural cooperation and people-to-people exchange. 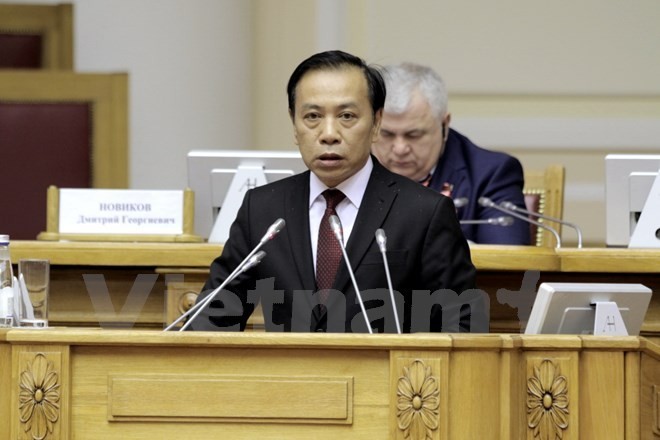 Striving for Peace: A Prominent Feature for Vietnamese People-to-people Diplomacy

According to Tran Dac Loi, Vice Chairman of Vietnam Peace Committee, since ancient times, the spirit of harmony and peace-loving has become a Vietnamese tradition. In the modern world, these Vietnamese values are beneficial to the current geopolitical climate.
November 22, 2022 | 10:05

Ambassador Nguyen Phuong Nga, President of the Viet Nam Union of Friendship Organizations (VUFO) granted a "For peace and friendship among nations" medal to Ambassador Extraordinary and Plenipotentiary of the Republic of Chile to Vietnam Patricio Becker on Dec. 2, in Hanoi. The medal honors Becker's contributions to consolidating and promoting Vietnam - Chile's bilateral relations.
December 04, 2022 | 15:55
Phiên bản di động