The colors of traditional and modern Chung cake

(VNF) - "Chung cake" (square glutinous rice cake) is a traditional cake of Vietnamese people in Tet Holidays. In the modern time, despite the abundant choice of food from across the country and the globe, to Vietnamese people, Chung cake is still the indispensible dish, a symbol of Tet.

(VNF) - "Banh Chung" (square glutinous rice cake) is a traditional cake of Vietnamese people during the Lunar New Year celebration (Tet). Nowadays, despite the abundant choice of food from across the country and the globe, to Vietnamese people, Banh Chung is still the indispensible dish for Tet.

According to Vietnamese legend, “Banh Chung” was invented by the 18th Prince, son of Hung Emperor in the contest of looking for a new Emperor.

3,000-4,000 years ago, Prince Lang Lieu, made round and square cakes, the round Day cake symbolizing the sky and the square banh chung symbolizing the Earth (under the ancient Vietnamese perception), to be offered on the occasion of Spring, the legend says.

Since the cakes he offered were of special meaning and delicious taste, Lang Lieu was selected to be the next Emperor. Since then, in honor of this 18th Prince, Vietnamese people always make and have banh chung in the Lunar New Year.

This legend aims to remind the next generations of the ancient tradition as well as the reason for banh chung. Besides, it emphasizes the important role of rice and nature in the wet-rice agriculture.

Up to now, banh chung has become the most famous and irreplaceable traditional Vietnamese food in Tet Holiday.

In contrast to the fast food in modern life, the process of making banh chung is time-consuming and requires the contribution of several people.

Main ingredients are glutinous rice, pork meat, and green beans wrapped in a square of bamboo leaves that will give the rice a green color after boiling.

Rice cake is wrapped in a square shape, and the wrapping power must be neither tight nor loose. Then the cake will be boiled in about 12 hours by wood.

The banh chung has nutrition with an original tasty flavor and may be kept for a long time. Eating the dish with vegetable pickles will bring you unforgettable taste.

In the traditional conception of Vietnamese people, the process of making banh chung is the opportunity for family to come together.

Sitting around the warm fire, all members in the family tell one another the past stories and are ready for a New Year with wishes for the best things.

However, nowadays, in big cities, the hectic pace of urban life doesn’t allow people to prepare banh chung on their own. Most families choose to buy it from the markets or shops.

While in the north, people enjoys banh chung, the edition of banh chung in the South is called banh tet.

Like its northern cousin, the log-like cake is traditionally made with glutinous rice and filled with mung bean paste and pork belly, but, instead of dong leaves, it is wrapped in banana leaves.

The interesting thing is, while the square-shaped banh chung has almost stayed the same for centuries, in many places across the southern region people have reinvented their way of making banh tet.

Some have changed its wrapping leaves; some have replaced the rice, while others have added more fillings, creating many famous alternatives of the traditional cake.

In some places, banh tet has different fillings like salted duck egg, dried shrimp and Chinese sausage, instead of the usual mung bean and pork as usual.

It is understandable since modern diners are keen to explore the new things. That change has been taking place in the form of rice and fillings used to stuff in banh tet. 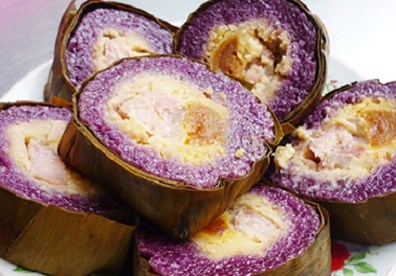 In the city of Can Tho (Mekong delta), there is a special version of banh tet: banh tet la cam, is said to be the brainchild of a veteran baker in Can Tho City.

Its glutinous rice is colored with the extract of magenta plant’s leaves, or la cam in Vietnamese. The coloring usually starts the night before the cooking. The color purple is only truly refined after the cake is wrapped in green banana leaves and boiled for 10 to 12 hours.

The cake’s fillings are also added with salted eggs’ yolk, which is a very nice touch.

In fact, it is the trademark of Khmer people who use their specialty com dep – green flatten glutinous rice – to invent banh tet com dep.

To make the special rice, they wash and sundry glutinous rice after harvesting. They then cook it in a clay pot, specifically using the stem of a banana leaf to stir the rice well until it is cooked. Once the rice pops, they pound it with a pestle and mortar.

The rice is sieved to have all husks removed, before being soaked in coconut milk for a few minutes to become soft.

Meanwhile, the cake’s fillings are simpler, as they are mainly mung bean paste mixed with sugar and vanilla.

To some people, banh tet com dep may not be as rich as others, but is still tasty in its own way: sweet, buttery and slightly fragrant./.