The role of feng-shui in stadium worldwide

Many football clubs worldwide are interested in the role of feng-shui. In the same vein, the Football Association of Vietnam (VFF) proposed to displace 40 stone balls in My Dinh Stadium to bring good luck for the Vietnamese team.

Many football clubs worldwide are interested in the role of feng-shui. In the same vein, the Football Association of Vietnam (VFF) proposed to displace 40 stone balls in My Dinh Stadium to bring good luck for the Vietnamese team.

As specially proposed by the VFF, My Dinh Sports Complex moved 40 stone balls around the stadium to another location. The change of feng shui just one day before the match drew many reactions from fans who had different views of the issue. But later on, after the match, the Vietnamese team just broke all ties and lost at My Dinh stadium.

Not only the Vietnamese team but also many other teams in the world are also interested in the feng-shui of the stadium. Of course, this is only a psychological boost to help the team feel more confident during the match; especially when they are not performing good.

This is happening not only in Vietnam, other parts of the world is also witnessing such changes during last few months or years.

Change the colour of the whole stadium

A superstitious top – tier Chinese team repainted their whole stadium in gold to bring better luck following a dismal run. Guangzhou R&F took the drastic action of repainting based on feng-shui. They believed that gold will be better than blue, the color of the Chinese Super League club’s strip, badge and originally its home ground too.

Actually all this followed a very dismal performance of just one home win in last four months. But since painstakingly repainting their 20,000-capacity Yuexiushan Stadium, the team in southern China has seen their fortunes dramatically reversed.

After that, they beat Fabio Capello’s big-spending Jiangsu Sunning 4-2 on home ground to climb to third in the CSL and make it four home wins on the trot in the CSL, scoring 18 goals in the process.

They also beat city rivals, Guangzhou Evergrande, in a home cup game. R&F coach Dragan Stojkovic told the club website:, “After we changed the color of our home stadium, we got five wins and a high goal-scoring rate as well.

“I think this is what the fans want to see — beautiful offensive football.” The Serbian former international added, “The gold color of our home stadium is pretty nice, no need to change it now.

In March 2002, all the eight teams who used the dressing room at the south end of the Millennium Stadium (a national stadium in Wales, England) lost their matches. These teams included big names like Arsenal, Birmingham City and Tottenham Hotspur.

This became an interesting puzzle and every team wanted to get rid of it.

To solve this, managers of this famous stadium invited a feng-shui expert, Paul Darby, who advised to establish two new dressing rooms at the Millennium Stadium.

Finally, the advice given by the feng-shui expert was taken into consideration and changes were made accordingly.

There are many more examples when teams followed feng-shui for better luck.

Former Thai Prime Minister, Thaksin Shinawatra, buried 100 diamonds under the grass of the City of Manchester Stadium when he first bought the famous football club Manchester City in 2008.

Similarly the Queens Park Ranger club slightly altered the position of the stands in the stadium, as advised by feng - shui experts. However, both teams are not successful as expected. Man City finished tenth in the English Premier League, QPR ranked 16th in the Championship.

These stories shows that rebuilding the stadium or making changes in the stadium, stands or ground according to feng- shui does not always bring good luck. In fact, the result of the match or any competition depends mainly on the ability to play, professional level, fitness level, and technical skills of the inpidual player and of the entire team./. 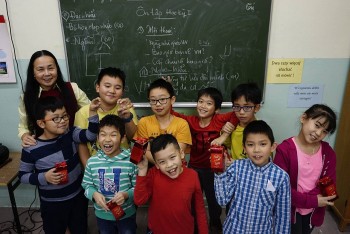 For more than 5.3 million overseas Vietnamese, Vietnamese is the soul and pride of the nation. Teaching and learning Vietnamese helps the overseas Vietnamese community to preserve their national cultural identity, maintain a connection with their homeland and country, introduce the Vietnamese language and culture to the world.
10:38 | 16/08/2022