Vietnam eliminates over 500 lines of tariffs on Cuban imports

The Vietnamese government has decided to eliminate 514 lines of tariffs on Cuban imports with effect from April, while another 49 will be reduced gradually until 2023, VGP reported on April 19.
Hannah Nguyen
April 20, 2020 | 02:00

The immediate tariff elimination applies to certain fish and shrimp, honey, some kinds of fruit such as pineapple, avocado, guava and mango, cement, chromite, disinfectant and protective suits.

Tariffs on sugar and unprocessed tobacco will be cut to 15% over the next four years while cigarettes and cigars will see tariffs reduced to 70%.

Vietnam will also lower tariffs on Cuba’s alcoholic drinks to 20% over the next four years.

The new pact is expected to elevate Vietnamese-Cuban economic, trade and investment cooperation to a level commensurate with their fine bilateral relationship.

In particular, the agreement will bring tremendous benefits to the business communities of the two sides, create favorable conditions for the import and export of goods to each other's markets, and promote two-way trade turnover, contributing to bringing Vietnam-Cuba economic and trade relations to new height.

Under the agreement, the two sides pledge to eliminate or reduce tariffs on almost all goods imported from the other country in five years.

Over the past years, Vietnam - Cuba economic and trade cooperation has made significant progress, with two-way trade turnover of over USD200 million per year. Cuba is always one of the ten key markets of Vietnam in Latin America./. 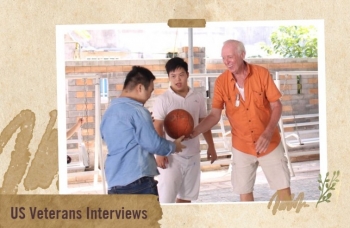 Matthew Keenan was sent to Vietnam to serve in US army bases in 1971. Years later, he moved to Da Nang to help people, especially children, affected by Agent Orange. He founded Global Talk, an initiative to help young Vietnamese learn English.
00:06 | 27/06/2022