Health authorities reported 8,481 new domestic cases of Covid-19 in 57 cities and provinces on Saturday, down 495 against Friday.

The three localities with the highest case count are Ho Chi Minh City with 1,240 infections, followed by Dong Nai and An Giang, with 743 and 631, respectively.

The Covid-19 death toll in Vietnam rose to 23,018 with the confirmation of 88 deaths Saturday.

Since the pandemic started last year, Vietnam has recorded over one million cases.

The National Startup Support Centre of Vietnam (NSSC) recently signed a Memorandum of Understanding (MoU) with the Association of Small and Medium-sized Enterprises and Crafts of the Czech Republic (AMSP ČR) with the aim to develop the two countries’ start-up ecosystem and entrepreneurship.

The MoU is part of a development co-operation project on entrepreneurship and innovation between these parties, financed by the Czech government.

Each party will also introduce qualified people, organizations and start-ups within its country to participate in the other’s events, programs, and activities for access to the network of mentors or start-up communities, fundraising, incubation, business matching and market penetration.

“While the large companies and investors on both sides are already engaged in business operations between our two countries without significant help of the governments, the small and medium sized companies very often still need to be supported in their business endeavors by their respective governments in order to be successful in foreign markets. That is why one of the main goals of the Czech development aid in Vietnam is also support of healthy business environment and entrepreneurship,” Jarkulisch noted.

“We hope that the co-operation between Vietnam and the Czech Republic will develop to a new height in the near future, not only in innovation activities and start-ups, but also in mindset and performances in supportive activities for businesses. We expect that the export growth between Vietnam and the Czech Republic will continue to grow through innovation and more investors will consider Vietnam a new investment destination and vice versa,” said Mac Quoc Anh, Vice President and Secretary-General of the Hanoi Small and Medium Enterprises Union.

Vo Huy Cuong, deputy head of the Civil Aviation Authority of Vietnam, shared this information at a seminar on reopening international tourism.

Without mentioning specific embarkation points, he said national flag carrier Vietnam Airlines would operate one flight to Da Nang City on November 17 and budget carrier Vietjet Air will operate one to Phu Quoc Island in Kien Giang Province on November 20.

Another 24 additional flights will carry foreign tourists to the three localities, mainly from South Korea, Japan, Taiwan and Thailand, he said.

On Thursday, Khanh Hoa Province, home to famous tourist hotspots Nha Trang and Cam Ranh, welcomed two flights from South Korea and Japan with a total of 429 passengers. The passengers would stay at the Vinpearl Resort & Spa Long Beach on the Cam Ranh Peninsula, reported VnExpress.

"These are encouraging signs and can be considered a good start for the international tourism reopening pilot plan," Cuong said.

Earlier, budget carrier Vietjet Air had sought approval to fly 250 South Korean tourists to Phu Quoc Island on November 20 under the vaccine passport program. All tourists would be taken to the Vinpearl Resort and Spa Phu Quoc for a three-day tour package.

Khanh Hoa, Phu Quoc and Da Nang are three of five localities that are allowed to welcome fully vaccinated foreign tourists from November onwards. The two other localities are the provinces of Quang Nam and Quang Ninh.

Foreign tourists need to furnish certificates showing they are fully vaccinated or have recovered from Covid; and test negative for the novel coronavirus within 72 hours before departure.

They are also required to book a package tour with one of designated travel agencies and furnish medical or travel insurance including coverage for Covid-19 treatment worth at least US$50,000.

The visitors have to install IGOVN and PC-Covid health declaration applications on their smartphones while in Vietnam.

Over 1.2 million doses of Pfizer-BioNTech vaccine administered on adolescents

As many as 12 cities and provinces in Viet Nam have inoculated teenagers aged 12-17 with over 1.2 million doses of Pfizer-BioNTech vaccine, according to the Ministry of Health.

Other localities are crafting plans to inoculate their adolescents.

So far, the vaccination campaign on adolescents is safe without any cases of serious side effects after injection.

Earlier, in early November, the Health Ministry announced a nationwide campaign to immunize children and teens against Covid-19 with Pfizer vaccine, cited VNP.

The vaccine, produced by American corporation called Pfizer in New York and BioNTech, a German biotechnology company based in Germany, has been recommended for children by the World Health Organization.

So far, the Pfizer vaccine has been administered to the 12-17 age group in about 40 countries.

Two final underground railway segments for Metro Line No 1 in Ho Chi Minh City are being installed and will be completed in two months.

The two segments are 660m long and 1.43m wide, and run parallel to each other between the Opera House and Ben Thanh rail stations.

Around 56 engineers and construction workers assigned to do the work are fully vaccinated and strictly adhere to Covid-19 regulations.

The Metro Line No 1’s underground railway system is 2.6km long, with three stations in the city center. Facilities such as lobbies and ticket machines for the Ba Son and Opera House stations have been completed.

Work on Ben Thanh Station is slated to be completed by the end of the year. Ben Thanh, Metro Line No 1’s central station, will connect to three other metro lines in the future, according to VNA.

Around 88 percent of the work for the metro line had been completed as of November 10. The line was originally expected to be finished by the end of the year, but the Covid-19 pandemic has greatly affected construction work and imports.

The metro line is now expected to be completed by the end of 2023 or early 2024, according to MAUR.

The VND43.757 trillion (US$1.9 billion) route, from Ben Thanh Market in District 1 to Suoi Tien Theme Park in District 9, is 19.7km long and will have 14 stations, three of them underground.

The metro has been built with official development assistance (ODA) and funds from the Japan International Cooperation Agency.

Of the total 17 imported trains from Japan, seven have been received.

The metro line is the first of eight metro lines to be built in the city.

On November 6, Hanoi’s first metro line opened for service, from Cat Linh in Ba Dinh district to Ha Dong district. Many locals said they preferred to use the metro line over their personal vehicles because of affordability and less traffic congestion and noise pollution. 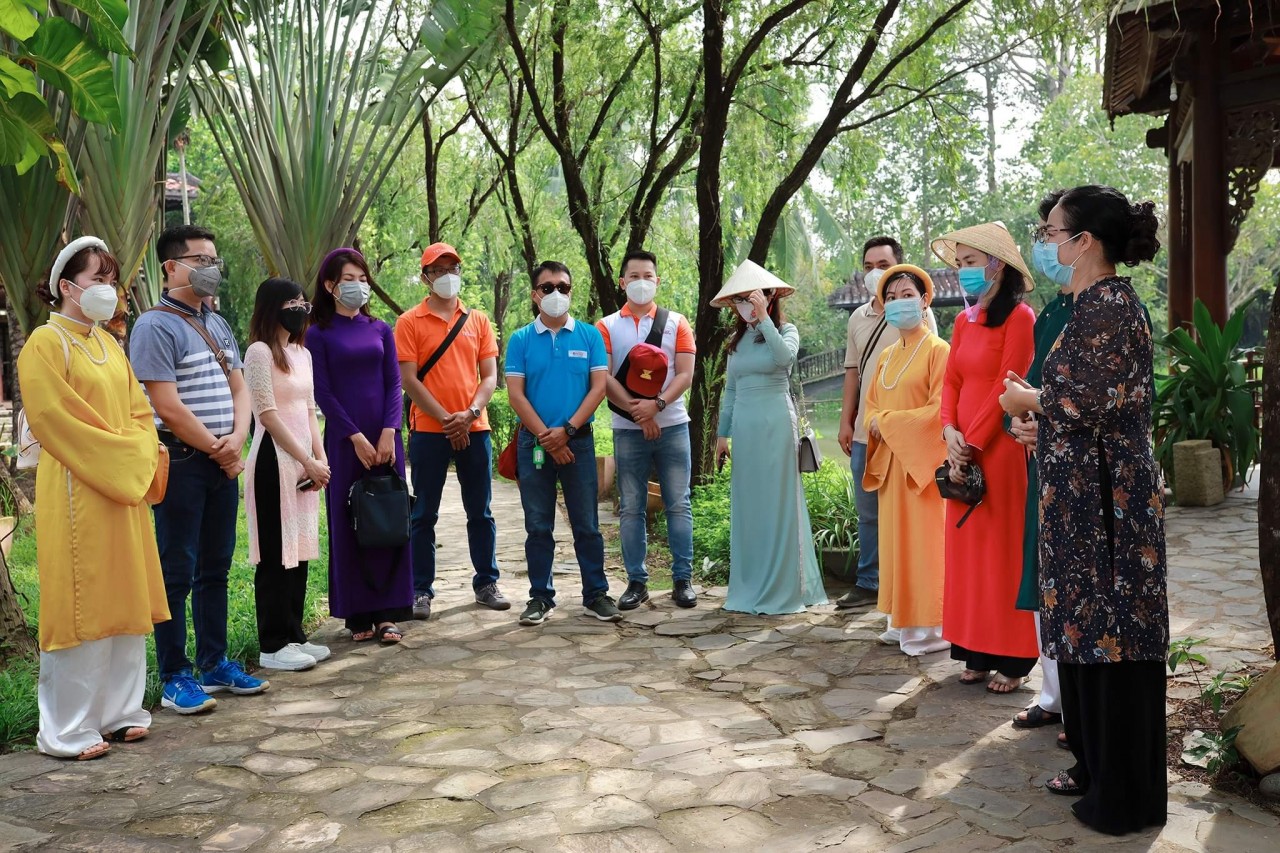