HANOI, VIETNAM – Media OutReach – 2 August 2021 – VinFuture Prize - Vietnam's global science – technology award - has officially kick-started the Pre-screening Round. Nearly 600 nominations from all over the world will go through a comprehensive evaluation process that will shortlist the most outstanding candidates for the Final Round, slated for September 2021.
VinGroup
August 02, 2021 | 14:00

HANOI, VIETNAM – Media OutReach – 2 August2021 – VinFuture Prize - Vietnam's global science – technology award - has officially kick-started the Pre-screening Round. Nearly 600 nominations from all over the world will go through a comprehensive evaluation process that will shortlist the most outstanding candidates for the Final Round, slated for September 2021. 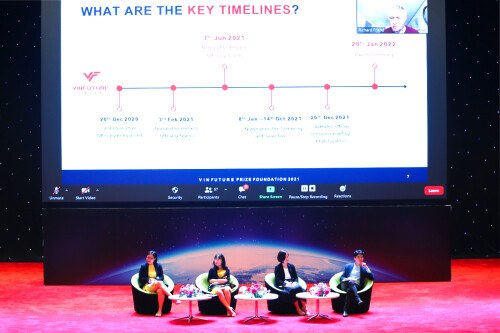 A webinar on nomination process for VinFuture Prize in April 2021

Compilation and qualification checks are an important step aimed at verifying the eligibility and fulfilment of each nomination, and collecting useful and diverse data for the overall assessments. To ensure scientific integrity, fairness, and transparency, all nominations will be assessed following rigorous evaluation procedures of highest international standards.

In August 2021, the Pre-screening Committee of VinFuture Prize, comprised of prestigious scientists and experts from leading universities, research institutions, technological and industrial organizations worldwide, will evaluate the nominations based on three core criteria, namely scientific and technological advancement, meaningful changes in people's lives, and scale of impact and sustainability.

The shortlisted nominations must adhere closely to the United Nation's 17 Sustainable Developmental Goals, as well as VinFuture's mission of creating meaningful changes in the everyday lives of millions of people.

"As a science and technology prize for humanity, VinFuture puts special emphasis on the nomination assessment and evaluation process. Satisfying the requirement of creating advancements and breakthroughs in science – technology is prerequisite. However, shortlisted nominations must also prove their potential to foster positive and large-scale impacts on everyday lives. Nearly 600 nominations represent nearly 600 different scientific perspectives and approaches to solving global challenges. We believe that the Pre-Screening Committee will work with their utmost diligence and highest sense of responsibility to select the most meaningful scientific initiatives for the Final Round", stated Dr. Le Mai Lan, Vingroup's Vice Chairwoman and Designated Representative of the VinFuture Foundation.

Besides honoring exceptional scientists who create breakthrough and impactful scientific research and inventions, the VinFuture Foundation will also seek additional sources of funding and connect scientists to the Vingroup's business ecosystem as well as investors who share the same vision. The purpose of VinFuture is to bridge the gap between research and reality, promote the application of scientific research, and bring about a better life for humanity.

The VinFuture Prize is a global science and technology prize founded by Mr. Pham Nhat Vuong, Chairman of Vingroup, and his wife, Madam Pham Thu Huong, to recognize groundbreaking scientific discoveries and technological inventions proven to create, or having the potential to create, better changes in the everyday lives of millions of people and foster a sustainable living environment for future generations.

Laureates of the inaugural VinFuture Prizes will be officially announced on December 20th, 2021. The Prize Ceremony is expected to be held in Vietnam on January 20th, 2022.