A drill on preventing the acute respiratory disease casued by a new coronavirus (nCoV) was held at the Hue Central Hospital in Phong Dien district, the central province of Thua Thien-Hue on February 2. 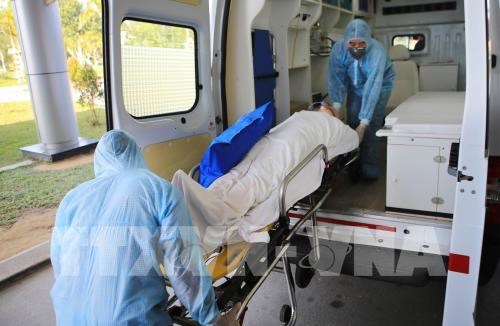 Chairman of the provincial People's Committee Phan Ngoc Tho came to supervise the exercise, which was joined by medical workers from different departments of the hospital.
In the drill scenario, the hospital received two patients suspected of contracting nCoV. One was a male who had ever been on trip to epidemic-hit areas and hospitalised with symptoms such as fever and coughing, and the other was a child coming from other province with the same symptoms who had travelled to China 7 days ago together with the family.

The hospial organised three quanrantine areas for the patients for testing and diagnosis, and then provided them with appropriate treatment, according to director of the hospital Pham Nhu Hiep.

As of February 2 morning, Thua Thien-Hue recorded no cases positive for nCoV.

The epidemic began on January 23 with the first two confirmed infection cases to be a pair of Chinese father and son. Its scope was identified in three provinces of Khanh Hoa, Thanh Hoa and Vinh Phuc.

Vietnam has so far confirmed seven nCoV-infected cases, including two Chinese, three Vietnamese returning from China's Wuhan, a receptionist at a hotel in Khanh Hoa province, and a citizen from the US.

To help people understand clearly about the virus, the Ministry of Health has issued a handbook of questions and answers about the mechanism of transmission, symptoms, complications, and how to prevent it. The handhook also provides hotline numbers of hospitals throughout the country./.

Mastercard Foundation Appoints Robin Washington to Board of Directors