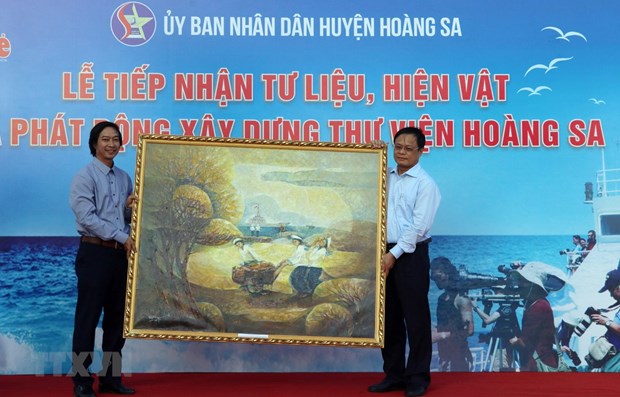 At the ceremony (Source: VNA)

At a ceremony on January 18, General Director of the State Records and Achieves Department of Vietnam Dang Thanh Tung handed over 19 chau ban (official administrative papers) on the establishment and exercise of the sovereignty of the Nguyen Dynasty (1802-1945) over the Hoang Sa and Truong Sa (Spratly) archipelagoes, including a paper published for the first time.

Meanwhile, Director of the Institute of Sino-Nom Studies Nguyen Tuan Cuong presented a map named “Hoang Le Canh Hung ban do”, which depicts a golden sand beach (Hoang Sa archipelago) stretching out to sea, corresponding to the area from the Cua Dai sea to the middle of Sa Huynh mountain in the mainland.

In recent years, communication campaigns on protection of Vietnam's sovereignty over Hoang Sa archipelago have attracted a great attention and support from the people of all classes.

From 2016, the Hoang Sa district People’s Committee has received 212 exhibits and documents with high historical and legal value from collectors, organizations and inpiduals in and outside the country.

At the ceremony, the Hoang Sa district People’s Committee announced that a Hoang Sa library will be developed with support from many agencies and organizations.

The reception of documents and exhibits, as well as the building of the library aim to build a data system on Hoang Sa for study, and contribute to raising public awareness of and responsibility for protecting and asserting Vietnam’s sovereignty over the archipelago./.

Mui Nghe (Da Nang), a feast for the eyes

More in Seas and islands

US bitotech firm: Moderna's COVID-19 vaccine is more than 94% effective

The story of the fishermen returning from the dead