Discover Top 7 Wonderful Places For Bungee Jumping In The World

The best part about bungee jumping is that you get to see the amazing views from above in a completely different way. If you are a lover of this thrilling sport, you definitely cannot miss these wonderful bungee jumping spots below.
Charlotte Pho
December 15, 2021 | 08:10

Bungee jumping, also spelled bungy jumping, is an activity that involves a person jumping from a great height while connected to a large elastic cord. The launching pad is usually erected on a tall structure such as a building or crane, a bridge across a deep ravine, or on a natural geographic feature such as a cliff. It is also possible to jump from a type of aircraft that has the ability to hover above the ground, such as a hot-air balloon or helicopter. The thrill comes from the free-falling and the rebound. When the person jumps, the cord stretches, and the jumper flies upwards again as the cord recoils and continues to oscillate up and down until all the kinetic energy is dissipated.

Since bungee jumping pioneer AJ Hackett opened the first commercial jump in New Zealand 30 years ago, adventure companies around the world have made this extreme sport accessible to the general public. Now, only 40 years after the very first bungee jump was performed off the Clifton Suspension Bridge in England, you no longer need to be savvy on the weight capacity and elasticity of ropes to attain the feeling of free-falling.

Top 7 best places for bungee jumping in the world

For the ultimate extreme journey, free-fall at a speed of up to 200km/h from the World's Highest Bungy Jump! Plunging from a platform 233 meters high, challengers will experience a 4-5 second free-fall before stretching the 50-meter bungy cord and rebounding at 30 meters above the ground. So go on, take a leap from the Macau Tower – be part of the Guinness World Record and show everyone you have what it takes!

The drop from Macau Tower holds the Guinness World Record for Highest Commercial Bungee Jump and is a favorite among adrenaline junkies. Jumpers leap from a platform built 233m above the ground and experience the ultimate free fall before slowing down 30 meters above the ground, where the cord tension rebounds the bungee back up. The design of the bungee cable system makes it possible to jump in nearly all weather conditions. If you’re looking for something a little less intense, you can try the Skyjump. Similar to base jumping, this tethered descent takes 17 seconds (longer than the bungee jump) and brings you gently to the ground floor of the Macau Tower. Hotel Riviera Macau offers rooms with unobstructed views of the Macau Tower.

The Europa Bridge or Bridge of Europe (Europabrücke) is a 777-meter-long (2,549 ft) bridge carrying the A13 Brenner Autobahn (and European route E45) over the 657-meter (2,156 ft) Wipp valley just south of Innsbruck, Tyrol, Austria. The bridge spans the Sill River and forms part of the main route across the Alps from western Austria to South Tyrol in Italy. It is also part of the main route between southeastern Germany and northern Italy.

Any view of the Alps is guaranteed to impress, but not many get to take in the view from upside down. Austria's Europabrücke Bridge, also known as the "Europe Bridge," is a 777-meter-long bridge — the longest footbridge in the world — with several traffic lanes on top and a bungee cord hanging below. As if jumping off a bridge isn't scary enough, this bungee station is right on the motorway, with the chaotic sound of traffic whizzing by in the background (good luck calming your thoughts before this one, jumpers!). But while the roadside jumping platform isn't particularly scenic itself, this inverted view of the Alps is unmatched. The Rupert Hirner Bungy sends you soaring at 100 kilometers per hour for five seconds before the bungee cord whips you back up.

The Contra Dam, commonly known as the Verzasca Dam and the Locarno Dam, is an arch dam on the Verzasca River in the Val Verzasca of Ticino, Switzerland. The dam creates Lago di Vogorno 2 km (1.2 mi) upstream of Lake Maggiore and supports the 105 MW Verzasca hydroelectric power station. It was constructed between 1961 and 1965 and starting shortly after its reservoir was filled, a series of earthquakes related to its water load occurred until 1971. The dam is owned and operated by Verzasca SA and is the fourth tallest in Switzerland.

The dam became a popular bungee jumping venue after a James Bond stuntman jumped off it in the opening scene of the 1995 film GoldenEye; a stunt voted as the best movie stunt of all time in a 2002 Sky Movies poll.

Keen to jump from a dam in the dark? If so, Switzerland's Verzasca Dam might fulfill your bungee fantasy. It's famous for being the location of James Bond's bungee jump in the movie "Golden Eye," which was voted the best movie stunt of all time in 2002. The jump from Verzasca Dam — also known as the Contra Dam — starts from 220 meters high and ends just over the Verzasca river, which is said to be the purest river on earth. You probably wouldn't notice, however, the crystal-clear waters below during this popular night jump.

The Nevis Highwire Bungy is not for the nervous, it is New Zealand's highest bungee jump. Your body can fly 134 meters above the beautiful valley of the Nevis River, the place situated approximately 40 minutes drive east from Queenstown. It is the highest Bungy (bungee) in Australasia and a once-in-a-lifetime experience.

You can expect a massive ground rush lasting 8.5 seconds! Nevis Bungy is New Zealand's highest bungy jumping and also swing jumping venue. You can test your courage and adrenaline level by jumping from a highwire cable car hanging 134m above the Nevis River valley ground. The place belongs to the broad global portfolio of Bungy spots of a New Zealand Bungy specialist and entrepreneur AJ Hackett. It is located on private land and is only accessible by organized 4WD cars.

The Bloukrans Bridge is an arch bridge located near Nature's Valley, Western Cape, South Africa. Constructed by Concor between February 1980 and June 1983, the bridge stands at a height of 216m above the Bloukrans River. Its central span is 272m and the bridge is 451m in length in total. Its primary use is that of a road bridge, carrying national route N2.

Bloukrans Bridge is the site of the world's highest commercial bridge bungee jumping, Bloukrans Bridge Bungy, operated by Face Adrenalin since 1997. The Bloukrans River below forms the border between the Eastern Cape and Western Cape provinces and is located in the Tsitsikamma region of the Garden Route.

Holding the title of the world’s highest single-span arch bridge, Bloukrans Bridge was the location of Africa’s first bungee jump. Walk along a path under the bridge until you reach the highest part of its arch, step onto the extended walkway, and bungee the 216 metres towards the Bloukrans River. If you’re not quite ready to take the plunge, you can also take in the views of the surrounding wilderness with a Bloukrans Bridge walking tour. Located in the nearby village of Nature’s Valley, Tranquility B&B offers the perfect change of pace after your bungee jump. The B&B is just steps from the beach and has an outdoor pool and hot tub.

Kaivopuisto (Swedish: Brunnsparken), nicknamed Kaivari in Finnish or Brunsan in Swedish, is one of the oldest and best-known parks in central Helsinki, Finland, and also a neighborhood of about 500 inhabitants where the park is located.

Each year, for the months of July and August, Finland’s largest bungee jump is temporarily constructed in Kaivopuisto, Helsinki’s oldest park. Standing at a height of 150 meters, the structure sits along the edge of the park’s beach and jumpers land on a platform floating offshore. During the jump, you can expect to reach speeds of up to 120 km/h. After your jump, don’t forget to pick up your certificate of completion as a memento of your bravery. Just a 13-minute walk from the park, Hotel Fabian is perfectly located to explore all the sights you saw from above before your jump.

7. Victoria Falls Bridge on the border of Zimbabwe and Zambia

The Victoria Falls Bridge crosses the Zambezi River just below the Victoria Falls and is built over the Second Gorge of the falls. As the river forms the border between Zimbabwe and Zambia, the bridge links the two countries and has border posts on the approaches to both ends, at the towns of Victoria Falls, Zimbabwe, and Livingstone, Zambia.

Connecting Zimbabwe and Zambia, the Victoria Falls Bridge spans the divide created by the Zambezi river. It’s here, with crashing Victoria Falls as your backdrop, that you will take your 111-metre leap of faith. Whether you go solo or convince another adrenaline seeker to join you for a tandem jump, the views are unparalleled. On your jump day, don’t forget to bring your passport. The bridge marks the border between Zimbabwe and Zambia, so you’ll need it to get onto the bridge. Shearwater's Explorers Village offers chalet and tented accommodation and is just an 8-minute walk away from Victoria Falls. 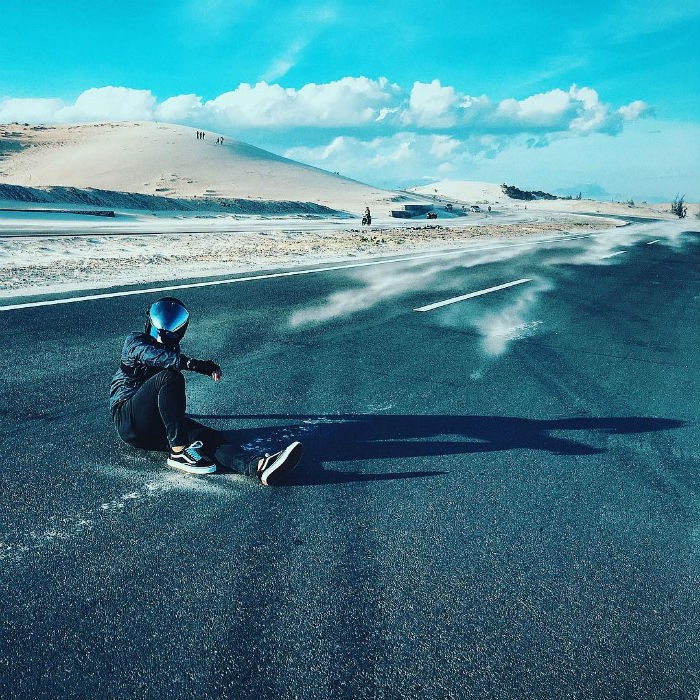