The first-round meeting of the joint working group on Vietnam-Cambodia border gates was held in Hanoi on January 9. 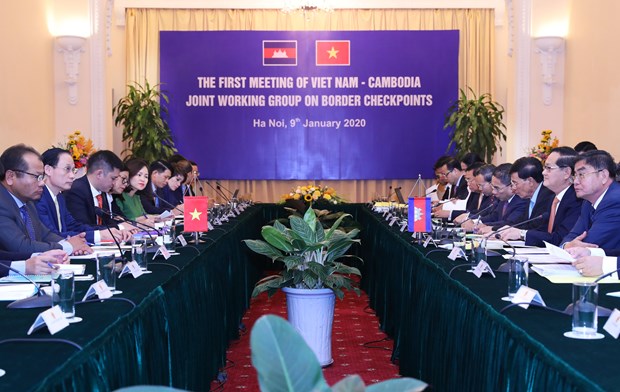 At the meeting (Photo: VNA)

The Vietnamese delegation was headed by Deputy Foreign Minister and Chairman of the National Border Committee Le Hoai Trung, while the Cambodian side was led by Minister of State at the Ministry of Interior Sok Phal.

The meeting took place in the spirit of friendship, sincerity and mutual trust.

The two sides evaluated the current operation of the border gates on the Vietnam-Cambodia land border.

They agreed that development of the border gates has contributed to promoting economic, trade, service, and investment activities between border provinces, thus improving the lives of people in shared border areas.

Further improvement of the border gates is needed to meet the increasing cross-border exchanges of goods and people between Vietnam and Cambodia, they said.

The two sides agreed to seek ways to develop a system of land border gates in line with the real development situation in each locality as well as in accordance with law and development plans of each country.

The immediate task is coordinating to conduct bilateral surveys of opening and upgrading pairs of border gates as proposed by the two countries within the framework of the 9th and 10th conferences on cooperation and development of Vietnamese and Cambodian border provinces.

The two sides agreed to ask for their governments’ permission to jointly draft an agreement on border gates and regulations on the management of Vietnam-Cambodia border gates, which aims to reinforce and develop the bilateral traditional friendship, and promote cross-border trade exchanges.

The Vietnamese side will soon give Cambodia the draft version of this agreement for studying.

The second-round meeting of the joint working group will be held in the second quarter of 2020./.

Hon Do - The land for best sunrise sightseeing in Ninh Thuan