Masterpiece “Kieu Story” by renowned poet Nguyen Du has been brought to the new genre of opera under the name of “Kim Van Kieu” by Vietnamese and French performers. 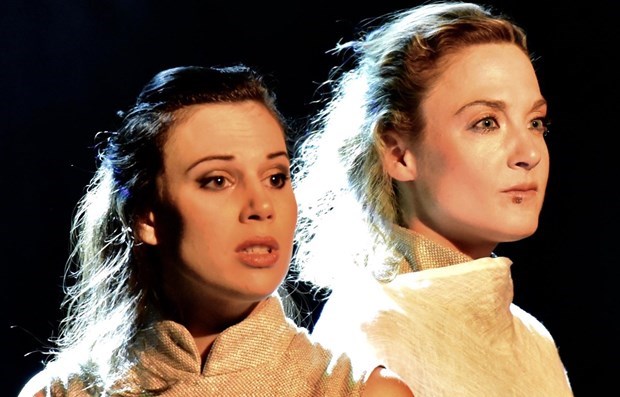 The story on the life full of upheavals of Kieu is retold from new angle. (Courtesy photo)

The “Kim Van Kieu” opera has been transformed and scripted in French on the basis of research and analyses of translations of “Kieu Story” by scholars Nguyen Van Vinh and Nguyen Khac Vien.

With his talent, director Christophe Thiry retells the life full of ups and downs of Kieu through the language of modern art from a new angle.

The French director creates a unique space for the “Kim Van Kieu”, bringing the audience back to the feudal time. However, the story is not bounded to that time only.

The director brings to the opera many new details. The story on the life of Kieu serves as the main flow of the opera, but the characters, space and time of “Kim Van Kieu” are expanded and extended. The social context in Vietnam from the feudal to the modern times is recreated in the “Kim Van Kieu”.

A special point in the opera is that besides the heroine Kieu in the origin by Nguyen Du, composers have brought to the opera two new characters: two women from Africa and America. Their lives and destinies have many things in common with Kieu by Nguyen Du. They are those women with a thirst for freedom, happiness and a trust on the power of justice when they have to face and overcome the tests of their life.

A representative of the organising board said this once again affirms the talent of renowned poet Nguyen Du and the popularity of the “Kieu Story”. Thanks to this, the masterpiece has sustained the time, reached out of Vietnam’s territory and become a source for composition and transform by artists of various art genres in the world.

The music demonstrates a unique and new experiment of the opera “Kim Van Kieu”.

Artists of the L’Attrape Theatre of France performed opera, pop music, drama and western musical instruments like violin, piano and guitar at the same time in the opera.

In order to create persity for the music and also to bring the opera “Kim Van Kieu” closer to the Vietnamese audience, directors have brought in colours of the Vietnamese culture. Many kinds of traditional musical instruments like “dan bau”, “dan nguyet” and bamboo flute will took the stage at the same time, performed by Mai Thanh Son and Mai Thanh Nam from the Ho Chi Minh City Conservatory and the Phu Dong Percussion Troupe. The main characters of the opera were played by French artists.

Earlier, the opera “Kim Van Kieu” officially debuted in Paris in June 2017. A representative of the French Institute in Vietnam said the five performances in Paris received a warm support from the audience and positive responses from experts.

“Kieu Story” is rated as a classical works of the Vietnamese literature that makes important contributions to the clarification of renowned poet Nguyen Du’s ideological stature and literature talents. It consists of 3,254 verses in the six-eight form, and was written in the “Nom” character. So far, it has been translated into over 20 languages in the world, including English, French and Russian./.

Vietnamese TikToker becomes a craze by staring at the camera