Though saltwater intrusion in the Cửu Long (Mekong) Delta was predicted to come earlier and with higher level of salinity than that recorded in the 2015-16 dry season, the damages to farming areas are expected to be less serious as authorities and farmers have taken measures to cope with the situation in the 2019-20 dry season.

Saltwater intrusion with a salinity rate of four grammes per litre is expected to enter 50-95 kilometres deep into the delta’s main rivers from February 11-15, an increase of 3-11 kilometres against the same period in 2016, according to the National Centre for Hydro-Meteorology Forecasting.

Đỗ Trưng, director of the Trà Vinh Irrigation Work Exploitation and Management One Member Limited Company, said the company has operated 48 sluices to prevent saltwater intrusion and store fresh water, but saltwater has entered early this year and reached 60-70 km deep into rivers and canals with a salinity rate of 3-10 parts per thousand.

More than 10,000ha of the winter-spring rice in the province face water shortage and 50 per cent of the area could be completely damaged, he said.

In Sóc Trăng Province, saltwater intrusion and drought have affected more than 2,100ha of rice, up 760ha compared to the end of last month, according to the province’s Department of Agriculture and Rural Development.

Lâm Hoàng Hiệp, deputy chairman of the Sóc Trăng People’s Committee, said the salinity rate had reached 7-8 parts per thousand in some areas, affecting the lives of locals and agricultural production. The committee has asked the province’s districts to take measures to cope with the situation in each locality, he added.

Nguyễn Hoàng Hiệp, deputy minister of Agriculture and Rural Development, said in September the ministry asked delta authorities to plant the 2019-20 winter-spring rice a month earlier than usual to cope with drought and saltwater intrusion.

Before the beginning of the winter-spring crop, authorities in the delta instructed farmers not to grow the winter-spring rice in areas that could be affected by saltwater intrusion. They also urged rice farmers to switch to drought-resistant crops.

The delta was also instructed to reduce the winter-spring rice area to 1.5 million hectares, down 100,000ha against normal years, he said.

“The damage to fruit trees is not expected to be serious,” he said.

The delta’s localities have also added more water pipes to secure the supply of water for locals since September, he said.

Trà Vinh Province, for instance, has built more than 60km of new water pipes and stored fresh water in reservoirs and canals.

Most households in Tiền Giang Province which cannot access tap water have water containers with a capacity of 2-3cu.m each to store enough water for drinking and eating during the dry season.

The delta, which includes 12 provinces and Cần Thơ City, is the country’s largest rice, fruit and seafood producer.

In the 2019-20 dry season, the delta’s provinces and Cần Thơ began dredging irrigation canals to store fresh water and upgraded and built irrigation systems prior to the beginning of the saltwater intrusion.

Hiệp said that construction of many irrigation projects in the delta have been put into use four to 14 months earlier than scheduled.

Last month, the delta put into use many irrigation projects that prevent saltwater intrusion and hold fresh water on a farming area of 300,000ha, he said.

In the 2015-16 dry season, saltwater intrusion and drought caused the loss of one million tonnes of paddy in the delta, and 500,000 households in the delta suffered a shortage of daily use water./.

The combination of soft rice noodles, refreshing palm sugar and coconut milk creates sweet Banh Canh noodles, one of the most famous delicacies of the Mekong River Delta of Vietnam.
October 04, 2021 | 14:46 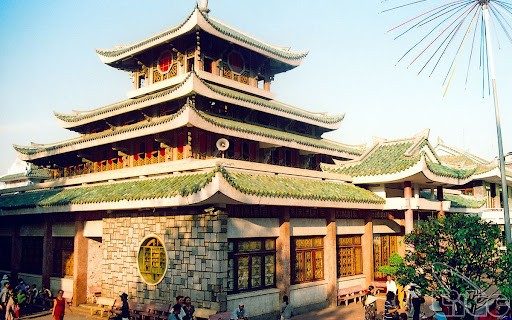 Mekong Delta is a beautiful land of culture, natural beauty and famous spots for check-ins. Let's check out these 8 cultural attractions in Mekong Delta region.
September 01, 2021 | 14:28