Throughout its history Vietnam has come into contact and exchanged with many cultures and civilizations.
Rosie Nguyen
ngtrang12.ftu@gmail.com November 27, 2021 | 09:19

Due to its strategic geo-political position, Vietnam often had to conduct resistance wars against foreign invaders.

Continuously experiencing resistance wars and suffering heavy consequences of the war, Vietnam is a country that understands best the value of peace.

That's why, along with the tradition of peace and friendship, the Vietnamese always seek to preserve peace and avoid war. The Vietnamese were only forced to accept war when the final limit of national sovereignty and independence was violated. That was the time when the whole country stood up and united to protect the nation.

Throughout a history of thousands of years, the spirit of peace has penetrated deeply into the warm blood of every Vietnamese, both in the struggle to protect the country's sovereignty, and to maintain a peaceful environment in the region, across the world, and in everyday life.

That spirit never stops, but always has the power to inspire and spread in people's lives. Wherever there is a new wind, that fire is blown up again.

President Ho Chi Minh is the embodiment of the nation, the crystallization of Vietnamese culture. As a revolutionary soldier in the struggle for national liberation, he is a symbol of peace and friendship.

Ho Chi Minh was one of the few revolutionary leaders who was aware that the change of the times will change relations between countries on a global scale.

He considered the struggle to establish equal relations among nations, against all the unjust imposition and domination of the "big countries" as the completion of the national liberation work.

Ho Chi Minh's diplomatic thought is imbued with the nation's diplomatic tradition, which is the thought of peace, friendship, cooperation and mutual development among nations.

Stemming from a love for people, President Ho Chi Minh tried all ways to prevent armed conflicts, taking advantage of all possibilities to resolve conflicts by peaceful means.

For him, waging war was only a last resort. Even when he was forced to wage war to protect the country, he still found ways to save the peace.

During the resistance war against the French, President Ho Chi Minh and the Communist Party of Vietnam founded the Vietnam Peace Committee to contribute to the cause of peacekeeping in Vietnam, and expand relations with the peace movement in the world.

This is one of the first people's organizations in Vietnam of which Uncle Ho was the first honorary President. Over nearly 70 years of operation, along with the ups and downs of history, the Vietnam Peace Committee has contributed to strengthening the solidarity of all classes of the Vietnamese people, calling peace-loving people around the world to support Vietnam in national liberation, national construction and homeland defense.

At the same time, the Committee also contributed to the movement of the world's people for peace, justice protection, and against war of aggression. Therefore, the Vietnamese people's struggle for national liberation in the past, the cause of national construction and defense today have enlisted the sympathy, support of friends around the world, through diverse and creative people-to-people diplomacy activities.

This is one of the important factors that helps us make glorious victories, and gain independence, prosperity, happiness and a Vietnam like today.

During the two resistance wars of the nation, according to Ho Chi Minh's thought, Vietnam always raised the flag of peace, launched many peace initiatives, and stepped up diplomatic activities. This made the world see the reality of Vietnam's situation, the nature of the war of aggression of colonialism, imperialism and their false peace claims.

According to Ho Chi Minh, peace is in the interests of all peoples, so we must fight for peace in the world to be sustainable, “keeping world peace means preserving our country's interests.

For him - a people who lost his country and were enslaved, the greatest spiritual value was "Nothing is more precious than independence and freedom!"

Having worked in hard labor for many years and experienced prison and torture, he had deep sympathy for the fate of all oppressed peoples. Therefore, as soon as he entered the revolutionary struggle, Ho Chi Minh achieved a combination of his national liberation struggle with the struggle "to liberate the oppressed from the dominant forces, to show love and charity.” To him, independence for his people was at the same time independence for all nations; national liberation is to liberate society and humanity.

President Ho Chi Minh attached himself to his people, and at the same time devoted his affections to all nations in the world, always supporting patriotic and revolutionary struggles.

Hecreatively applied the tradition of peace and friendship of the Vietnamese people in any circumstances.

He directed diplomacy in the spirit of raising the flag of independence and peace, and gathering progressive forces into an international front in support of Vietnam.

It can be affirmed that the thought of peace and friendship wad always in President Ho Chi Minh's mind. Even when he had to wage a one-on-one struggle with the imperialists and colonialists to gain national independence, he always looked for every opportunity to negotiate if possible to avoid violent, senseless war.

In the spirit of upholding our independence, sovereignty and territorial integrity, we do everything to maintain a peaceful environment, make friends with all countries, and turn enemies into friends. More than ever, President Ho Chi Minh's thoughts of peace and friendship guide our actions. 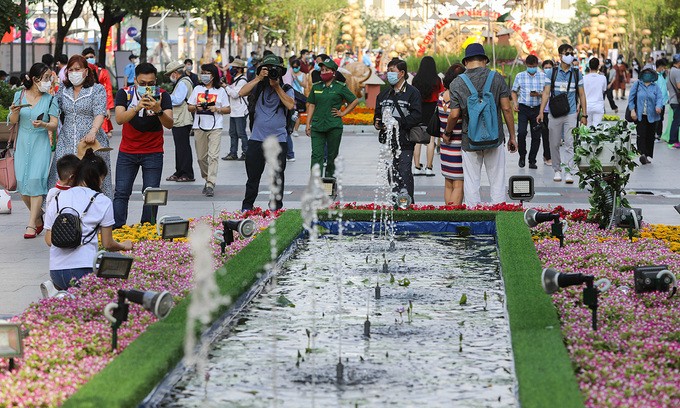 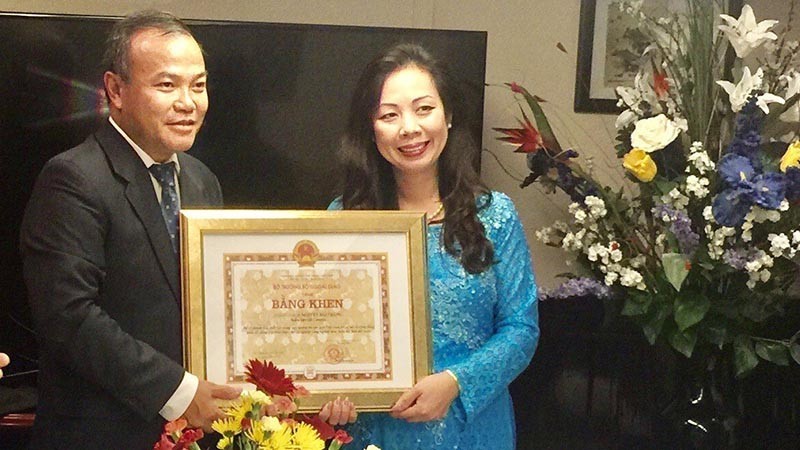 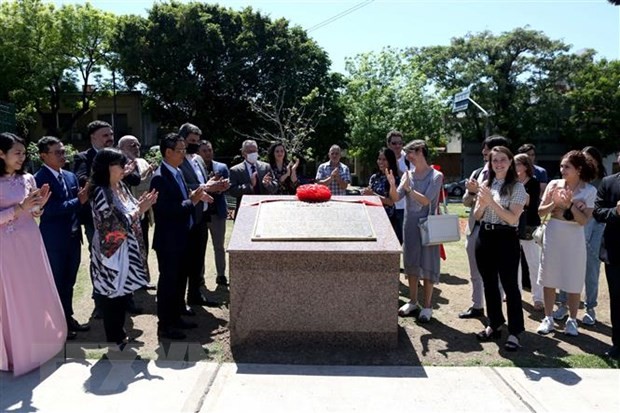 The Embassy of Vietnam in Argentina held the ceremony to commemorate the renovation of the Vietnam square and the inauguration of the bronze plate capturing President Ho Chi Minh’s biography on Oct. 27 in Buenos Aires.
October 28, 2021 | 18:00