The governments of the Republic of Korea and Turkey will donate more than 1 million doses of Covid-19 vaccine to Vietnam.
Hannah Nguyen
ngminhphuong26@gmail.com October 13, 2021 | 09:12

Over one million vaccines to be donated from the Republic of Korea and Turkey to help tackle Covid-19 in Vietnam, reported VNA Oct.12.

During the talks, Oktay said Turkey wishes to further enhance its multi-faceted cooperation with Vietnam. He also announced Turkey’s decision to help Vietnam with 200,000 doses of Covid-19 vaccines, oxygen concentrators and many other medical supplies to serve the pandemic combat. PM Chinh thanked Turkey for the decision.

Both affirmed to attach importance to Vietnam-Turkey friendship, and agreed to promote the multi-faceted collaboration. The two leaders also exchanged invitations to visit respective countries when conditions permit.

During a reception in Hanoi with the RoK Ambassador on the same day, PM Minh thanked the RoK Government and businesses for their support for Vietnam in the fight against Covid, and expressed the hope that the RoK side will continue to cooperate with and support Vietnam in combating Covid, especially in terms of accessing vaccine supplies and medicines for treatment, developing pharmaceutical industry, and improving medical capacity.

Regarding economic cooperation, PM Chinh wished that the two sides would continue to encourage Korean businesses to invest more in Vietnam.

He suggested that the two sides consider the early resumption of commercial flights and recognition of each other's vaccine passports for resuming economic activities between the two countries. He called on the RoK side to create favourable conditions for the Vietnamese community in the country.

He announced that the RoK government will donate 1.1 million doses of Astra Zeneca vaccine to Vietnam, and this batch of vaccine is expected to arrive in Vietnam on Oct. 13.

The RoK will continue to consider more medical assistance, including vaccines, for Vietnam in the near future, he said, affirming that Vietnam is one of the most important partners of the RoK.

The ambassador noted that despite the complicated developments of the pandemic, two-way trade between Vietnam and the RoK still grew, and Vietnam remains an attractive and safe destination for RoK investors. The RoK's new investment in Vietnam this year surged by 24% over the previous year.

He said the RoK side wants to lift the relations between the two countries to a new height on the occasion of the 30th founding anniversary of diplomatic ties.

Earlier, on Oct. 11, the Vietnam Fatherland Front (VFF) Committee in Ho Chi Minh City received medical equipment and supplies worth nearly VND 6 billion (USD 260,000) donated by the RoK's Consulate General in the city and members of the Korea Chamber of Commerce and Industry.

Speaking at the event, RoK Consul General to the city Kang Myong Il expressed his hope that the donation will make an active contribution to the fight against the pandemic in the city. He believed that Vietnam will soon defeat the pandemic and become a key economy in the Asia-Pacific in the future.

The United States also is donating 111 ultra-low temperature freezers to Vietnam to help vaccine distribution throughout the country. Chargé d'Affaires a.i at the US Embassy in Vietnam Christopher Klein handed over the first 36 freezers on Oct. 12 to the Ministry of Health at the National Institute of Hygiene and Epidemiology, with the remaining 75 to follow later this month.

14 larger units will stay in Hanoi to improve national and regional distribution capacity for Covid-19 vaccines requiring ultra-cold storage, like the 3.1 million Pfizer vaccines that arrived from the U.S. via COVAX over the past 10 days. The rest will provide storage at the Pasteur Institute in HCM City and for each province.

Previously, the US Government also presented and provided 9.5 million doses of Moderna and Pfizer vaccines to Vietnam via COVAX Facility mechanism when the entire Vietnamese political system and people were striving to control the spread of the pandemic.

Vietnam is projected to need 166 million doses of vaccines in 2022, including those for children between 12 and 18 years old.

As of Oct. 10, Vietnam had received 87.7 million doses of vaccines, according to a report of the Ministry of Health’s General Department of Preventive Medicine and the National Institute of Hygiene and Epidemiology. As many as 81.7 million doses have been distributed to localities.

To date, over 55.22 million doses have been administered, with some 16 million people fully vaccinated, or 22.1% of the population.

HCM City has to date received the highest number of vaccine doses and taken the lead in vaccination coverage.

As many as 12.3 million doses have been administered, with 5.3 million people, or 72% of the southern hub’s population, having received two full shots.

Vietnam is expected to receive more than 65 million doses in the two remaining months of 2021. 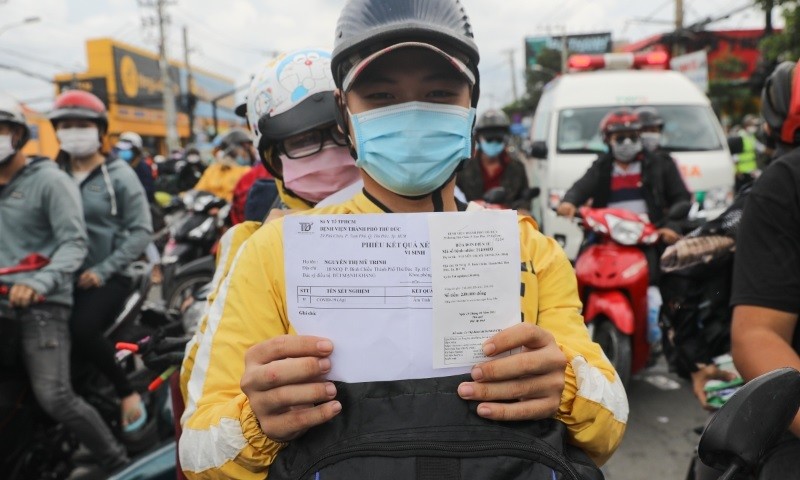 Vietnam's Vaccination for Effective Reopening in Hopes for Faster Recovery When 'Living With Covid', Foreign Experts

Foreign observers' latest comments saying that while Vietnam began to take measures for effective control of Covid-19 and recovering socio-economic, prioritized vaccination, sufficient workers, a streamlined “green pass” policy and the lifting of transport restrictions are key to an effective economic reopening in Vietnam.
October 04, 2021 | 15:05