SEA Games 31 Updates: Vietnam Athletes Get Off to a Good Start

Vietnamese sport competitors have determined to perform their best in the ongoing 31st Southeast Asian Games.

First medal for Vietnam in diving: Ngo Phuong Mai became the first medalist for Vietnam at the ongoing 31st Southeast Asian Games (SEA Games 31) in the country after winning a bronze medal in diving on May 8. After the five dives in Hanoi, Mai scored a total of 224 points after Nur Dhabitah Sabri and Kimberly Bong, both of Malaysia, scored 290.45 and 230 points, respectively.

The hosts launched various attacks from the start of the May 7 game to beat their rivals 24-14 and 23-12. Vietnam’s No.10 La Van Lon continued to be the top scorer, as he did during the team’s previous victory over Singapore. Thailand on the same day defeated Singapore 2-0.

Vietnam grabbed their third win in a row at SEA Games 31's men's beach handball tournament on May 8 in northern Quang Ninh province. The host team defeated Thailand 2-1 in the third-round match on Tuan Chau Island. With three wins, Vietnam are top of the ranking table and have one hand on the championship trophy, although there are three more matches to go.

A silver medal in men’s double diving: Nguyen Tung Duong and Phuong The Anh of Vietnam snatched a silver medal in men’s double diving at the ongoing SEA Games 31 on May 8. They were after Chew Yi Wei-Ooi Tze Liang of Malaysia in the 3-m dive. Malaysia now tops the tally with two gold and one silver and is followed by Vietnam with one silver and one bronze.

Vietnamese kickboxers get off to good start to SEA Games 31: Vietnamese kickboxers had a strong start to the 31st Southeast Asian Games at Bac Ninh Gymnasium on May 8. Nguyen Thi Hang Nga started the defense of her title with a 3-0 victory over Teo Vireen of Malaysia in the quarter-finals of the women’s 48kg full contact category. 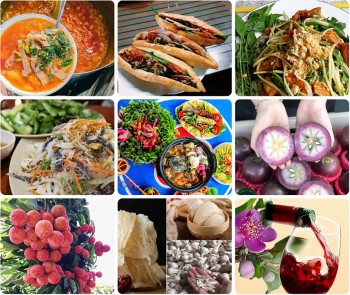 10 Vietnamese dishes, based on nominations by the Vietnam Records Organization (VietKings), were sent to Asia Century Organization for recognition for localities of Vietnam.
10:08 | 20/05/2022