Any journey from Pleiku to Kontum should include a stop at T’nung Lake (“Bien Ho” - Sea Lake); the flooded cater of a volcano millions of years old which now serves as the city’s reservoir.

(VNF) - Any journey from Pleiku to Kontum should include a stop at T’nung Lake (“Bien Ho” - Sea Lake); the flooded cater of a volcano millions of years old which now serves as the city’s reservoir.

Bien Ho, a freshwater lake in Bien Ho Commune to the north of Pleiku City of Gia Lai Province, about seven kilometers from the heart of Pleiku City along National Highway 14, where you turn right for another three kilometers to reach your destination.

The lake, surrounded by pine forests and mountain, is 230 hectares wide, expanding up to 400 hectares in the rainy season, about 30 meters deep.

The lake is surrounded by pine forests and mountain. (Photo: lovepcdolls on Instagram)

Locals also call it T’Nung or Ea Nueng, which means a “sea on the mountain”. It used to be a volcanic crater that erupted millions of years ago. The lake is 900 meters above sea level and is called the “gem” of Pleiku.

Like many other tourist attractions, there are several stories and legends told about the lake’s origin by ethnic minorities.

According to local folklore T’nung Lake was named after an ethnic village named where everyone lived happily together. One day a fierce quake erupted and destroyed the village, turning it into ash. When the fire was finally doused all that remained was a deep hole. The survivors stood beside the deep hole and cried, filling the hole with their tears and turning it into a lake.

In the rainy season in the central highlands, many streams pour into the lake causing the water level to rise. Some villages of Ba Na and Gia Rai ethnic minorities earn their living by fishing on Bien Ho. Its freshwater fish resources provide hundreds of tons of fish to Pleiku City every year.

At the end of the slope is a beautiful house. (Photo: Hoa Carol)

The road to T’nung Lake is through a green canopy of pine trees. At the end of the slope is a beautiful house where tourists can get some fresh air, pose for photos and contemplate the charms of the lake.

T’nung Lake looks like an emerald with its clear, green water. Both the lake itself and surrounding area boasts stunning scenery, making it the pride of Pleiku City.

The ideal time to contemplate the lake is in the morning when the lake is still completely covered by clouds rolling like strips of silk. Tourists have the chance to witness the first rays of sun in the morning and enjoy the forest sounds while colorful butterflies dance around the streams.

The lake is still completely covered by clouds rolling like strips of silk. (Photo: gialaitraveler)

To satisfy curiosity, if contemplating the charms of the lake is not enough, visitors can take a “thuyen doc moc” (hollowed - tree boat or a dugout canoe) to explore hidden charms of the lake and discover the magnificence of exotic lifestyles in harmony with wild nature. There tourists will see the abundant and varied fauna and flora.

You can also visit villages of ethnic minorities such as Bahnar and Jarai…, living on the bank on the occasion of their festivals. Travelers will enjoy lively interesting dances and singing by the highlanders.

Wild boar roasted over the coal stove is a typical specialty of ethnic minorities in the Central Highlands. The wild boar is stuffed with citronella leaves, and mixed with different spices such as galingale, garlic and honey. Each boar weighs five to fifteen kilograms and as it feasts on natural food like vegetables, it is lean meat with very little fat.

Com lam and ruou can. (Photo: lavender_ngoc on Instagram)

Besides, tourists will have a chance to taste “com lam” (bamboo-tube rice), “ruou can” (wine drunk out of a jar through pipes), “xoi la” (sticky rice wrapped in leaves), “ca lang” (hemibagrus) and other flavors of the uplands. 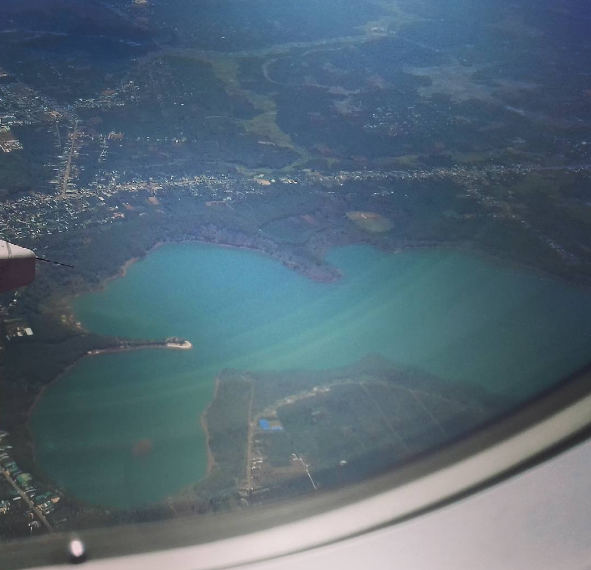 The lake viewed from a plane’s window. (Photo: linh.pyx on Instagram)

Bien Ho is called the “gem” of Pleiku. (Photo: thientri77 on Instagram)

Myths of Vietnam: Here Be Dragons