National Assembly Chairman Vuong Dinh Hue’s official visit to Cambodia, attendance in the 43rd ASEAN Inter-Parliamentary Assembly (AIPA) General Assembly, and official trip to the Philippines from November 19 to 25 have contributed importantly to fostering Vietnam’s cooperation with Cambodia and the Philippines, and ASEAN inter-parliamentary collaboration.

The statement was made by Bui Van Cuong, NA General Secretary and Chairman of the NA Office, according to VNA.

Cuong affirmed that the top legislator’s seven-day trip was a success, with nearly 50 activities.

The NA leader also met executives of some Philippine enterprises doing business in Vietnam and attended a bilateral investment and trade forum. Besides, he visited the Vietnamese embassies in Cambodia and the Philippines and talked to representatives of the Vietnamese community in Cambodia.

The visit to Cambodia was the first by Hue as the NA Chairman and also among the activities in the Vietnam - Cambodia Friendship Year 2022 and in celebration of the 55th anniversary of the two countries’ diplomatic ties.

Parliamentary leaders of Vietnam and Cambodia discussed many cooperation aspects, signed a memorandum of understanding on cooperation between the two parliaments, and witnessed the signing of a cooperation agreement between the secretariats of their NAs.

In Cambodia, Chairman Hue took part in AIPA-43 and delivered an important speech. On the sidelines of this event, he had bilateral meetings with parliamentary leaders of some AIPA members and observers.

Within the framework of AIPA-43, Hue and his Cambodian counterpart Samdech Heng Samrin and Lao counterpart Saysomphone Phomvihane signed a joint statement on the establishment of a mechanism of the Cambodia-Laos-Vietnam parliament high-level conference, according to Vu Hai Ha, head of the foreign relations committee of the NA.

The Vietnamese delegation’s participation in AIPA-43 aimed to continue implementing the policy of proactively, actively, comprehensively, and intensively integrating into the world and elevating multilateral diplomacy; and join hands with other AIPA member parliaments to strengthen ASEAN’s solidarity and centrality while enhancing AIPA’s relations with partners, thereby contributing to the ASEAN Community building and promoting regional peace, cooperation, and development.

It was also one of the first trip by a foreign parliamentary leader to the Philippines after this country successfully held the general elections in May 2022 and elected new leaders of its House of Representatives and Senate in July.

Aside from working to intensify cooperation between the two legislatures, Hue and senior leaders of the Philippines also discussed measures for augmenting multifaceted ties to help bolster the Vietnam - Philippines strategic partnership.

Notably, both the House of Representatives and Senate of the Philippines issued resolutions affirming the enhancement of relations between the countries’ legislative bodies, with the host nation setting up the Philippine-Vietnam Parliamentarians Friendship Society.

The resolution affirms that the Philippine Senate highly values the Vietnamese National Assembly's strengthening of relations between with its Philippine counterpart. It aims to establish closer parliamentary ties between the two nations, enhancing bilateral political, economic and cultural cooperation, developing and strengthening their participation and cooperation in key areas, promoting existing bilateral mechanisms, implementing signed agreements and finding new ways to deepen cooperation between the two governments.

The Philippines thanked Vietnam for creating favourable conditions for rice trading with the country, as well as providing masks and medical supplies to the Philippines when Covid-19 pandemic peaked in the country.

Along with Resolution 571 approved by the House of Representatives of the Philippines, the Senate adoption of Resolution 26 affirmed that the Philippines attaches great importance to the strengthening of ties between the two parliaments and the two countries in general. 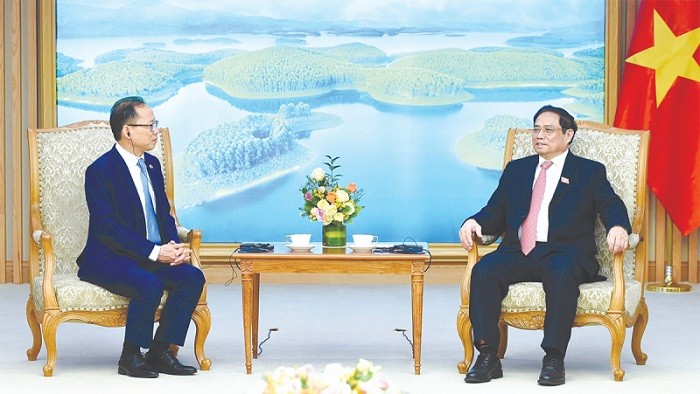