Vietnam Hosting Competitions of The Army Games Gets Appreciation

The contests in Vietnam, slated for August 31 to September 3, sees the participation of Bangladesh, Belarus, Laos, Mali, Russia, Uzbekistan, Venezuela, and the host country.

This is the first time Vietnam has hosted competitions of the Army Games, which once again affirms the sound cooperation among the militaries of Vietnam, Russia, and other countries.

The Army Games 2021, organized by Russia's Defence Ministry, is scheduled for August 22 - September 4 with 34 contests and 260 teams from 45 countries. Competition events are held in 11 countries.

After the opening of the Army Games 2021 in Hanoi, Rear Admiral Subbotin Andrey Nikolaevich from the Russian Ministry of Defense talked with the Vietnamese media about the event.

In the face of the complicated situation of the Covid-19 epidemic, in a short time, Vietnam has overcome difficulties and prepared the training ground well to meet the standards set by the organizing board in Russia, he said.

On behalf of the Organizing Committee of the Russian Federation, the Rear Admiral congratulated the participating teams.

The issue of ensuring food safety and hygiene and the prevention of the Covid-19 epidemic in Vietnam was also praised by Mr. Nikolaevich. The rations of participating teams are nutritious and of much higher quality than the regulations of the Organizing Committee, according to the vietnamnet.

"I attended the flag raising ceremony, the opening ceremony of the event and of the cultural space. The organization and administration of Vietnam was spectacular. Your epidemic prevention work is very good," said the Rear Admiral.

This event, which is being hosted by Vietnam for the first time, has exceeded the expectations of the Organizing Committee.

During the epidemic, the working process between the Organizing Committees of the Army Games 2021 in Vietnam and Russia must be held online. Thanks to the good network infrastructure, there are no problems related to connectivity and information technology.

He was especially impressed with the cultural house, which displays a lot of artifacts and is the place for performing national costumes of all participating countries.

Nikolaevich emphasized that the main goal of the event is to strengthen relations between the army and the Ministry of Defense of Russia and Vietnam.

The representative of the Army Games 2021 Organizing Committee hoped that the non-political spirit of the games will be spread to the world for the goal of peace and friendship. Russia is the founding country of the Army Games and it is willing to share organizing the event with other countries.

Lt. Gen Nguyen Van Nghia, Deputy Chief of the General Staff of the Vietnam People’s Army and head of the organizing board, said this is the first time that Vietnam has hosted competitions of the Army Games, which once again affirms the sound cooperation among the militaries of Vietnam, Russia, and other countries.

According to information from the Russian Ministry of Defense, the 2021 International Military Games takes place in 11 countries with more than 280 military teams from 43 countries and territories around the world, competing in 34 categories.

Besides the Military Medical Relay Race and Sniper Frontier contests, many sideline activities are being held. The contest will close on September 4.

Also, under the framework of the Army Games 2021, the Ministry of National Defense of Vietnam has organized a cultural space and an exhibition of weapons and military equipment in Hanoi

The exhibition displays military equipment and weapons manufactured by the General Department of Defense Industry and the Military Industry - Telecommunications Group (Viettel).

The cultural space introduces the tradition, development and international integration of the Vietnam People's Army as well as art and fine art works showing Vietnamese culture, identity and people.

This is also a place to organize performances and folk games of Vietnam and participating countries, as well as sports exchanges on the sidelines of the competition. 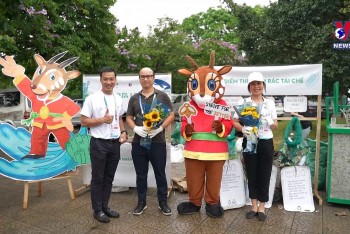