70 booths from both Vietnamese and Japanese enterprises will use the occasion as a platform to introduce culture, education, tourism, and food to visitors.

Artists will demonstrate the excellence of Japanese calligraphy, showcase classical and modern dances of both nations, and put on martial art performance during the course of the four-day festival.

Most notably, an exhibition displaying Japanese traditional dolls and a painting exhibition drawn by Vietnamese and Japanese children in kindergartens will offer a unique experience for visitors.

Furthermore, the organisers will hold an exchange with Japanese football club Kawsaki Frontale, as well as offering a workshop to connect tour operators.

Vice Chairwoman of Da Nang City People's Committee Ngo Thi Kim Yen, head of the festival organizing committee, emphasized that the Vietnam - Japan Festival in 2022 is an important event, taking place in the context that Da Nang city is gradually changing. restore international exchange activities after two years of interruption due to the impact of Covid-19.

In Vietnam, Japan is often referred to as 'the land of cherry blossom' or 'the land of rising Sun'. Many of its cultural pieces such as kimono dress, ikebana flower arrangement, cherry blossom, samurai fighters, manga books, sushi and sashimi are very popular among Vietnamese, young and old alike.

The Vietnam - Japan Festival 2022 will open at 19 pm on July 14 at the main stage of East Sea Park, chaired by the city's leaders, and with the participation of the Consul General of Japan in Da Nang.

According to the Da Nang People's Committee, in more than 10 years of implementing cultural diplomacy, Da Nang has witnessed a sharp rise in international visitor numbers.

Through exchange events, exhibitions, arts performances and film festivals organised by the municipal government in coordination with cultural centres and foreign diplomatic missions in Vietnam, it has attracted the attention of a large number of local residents and international friends.

Thanks to that, the position of Da Nang, and Vietnam at large, have been raised up in the international arena.

Besides Vietnam - Japan festival, the city will organise the Vietnam - Republic of Korea festival and ASEAN festivals with 10 participating countries. 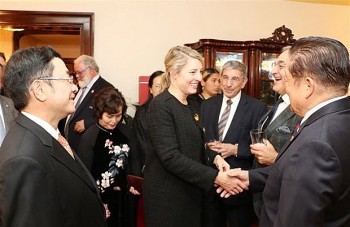