Vietnam and Laos should cultivate and constantly consolidate their close friendly neighborly relationship and special solidarity for the security and development of each country as well as peace and stability and cooperation in the region.
Tarah Nguyen
thuyhang.vietnamtimes@gmail.com April 27, 2022 | 08:53

Vietnam and Laos should cultivate and constantly consolidate their close friendly neighborly relationship and special solidarity for the security and development of each country as well as peace and stability and cooperation in the region.

National Assembly Chairman Vuong Dinh Hue on April 26 hosted a reception for Vice President of Laos Pany Yathotou, who is on an official visit to Vietnam.

NA Chairman Hue congratulated the Lao Party, State and people on their great achievements across fields, and highlighted significant contributions of the Lao NA through all periods in general and during the tenure when Pany Yathotou worked as the Chairwoman of the NA in particular, reported the Nhandan.

The Vietnamese top legislator pledged to make every effort to enhance the relationship between Vietnam and Laos.

Noting her delight to see Vietnam’s developments amid the COVID-19 pandemic, Pany Yathotou said as a close friend of Vietnam, she is proud of the country’s socio-economic achievements under the leadership of the Communist Party of Vietnam (CPV).

She suggested the two NAs and People’s Councils of cities and provinces, especially border localities, continue their cooperation and exchange of experience in law-making and supervision.

The legislatures should continue to monitor the implementation of cooperation projects rolled out by the Governments to ensure their progress, she said, suggesting Vietnamese and Lao NA deputies, including female legislators, tighten collaboration and continue with experience exchange, particularly in protecting rights and interests of women.

Pany Yathotou lauded NA Chairman Hue’s initiative to establish a cooperation mechanism between legislative bodies of Vietnam, Laos and Cambodia to share opinions and experience in a more timely and effective manner.

NA Chairman Hue stressed that the Vietnamese legislature is ready to consider and remove institutional obstacles in order to facilitate cooperation between businesses of the two countries, contributing to raising the two-way trade and advancing the economic, trade and investment ties.

The Vietnamese NA also supports the enhancement of training of Lao students as well as the exchange of professional skills between officials of the two countries, NA Chairman Hue continued.

Both agreed that Vietnam and Laos will coordinate to organise activities in the Vietnam-Laos Solidarity and Friendship Year 2022 to mark the 60th anniversary of the bilateral diplomatic ties and 45 years of the signing of the Treaty of Amity and Cooperation.

On the occasion of Laos’ traditional New Year (Bounpimay), NA Chairman Hue asked Pany Yathotou to convey his greetings to NA Chairman Xaysomphone Phomvihane and other leaders of Laos.

Vietnam and Laos need to maintain the regular exchange of delegations and high-ranking officials and strive to turn economic, trade and investment cooperation into a pillar of bilateral relations, President Nguyen Xuan Phuc said on April 26.

President Phuc made the statement while hosting a reception in Hanoi for Vice President of Laos Pany Yathotou, who is paying an official visit to Vietnam.

The Vietnamese President spoke highly of the contributions made by the Lao Vice President to the development of Laos-Vietnam special relations and congratulated Laos on the country’s important achievements in recent years.

He expressed his belief that under the leadership of the Lao People’s Revolutionary Party (LPRP), its people will effectively carry out the resolution issued at the 11th National Congress of the LPRP as well as the socio-economic development plan for 2021–2025, bring the COVID-19 pandemic under control, and revive the economy.

Welcoming the results of talks held earlier the same day between the Lao Vice President and her Vietnamese counterpart Vo Thi Anh Xuan, President Phuc underlined that, to promote the efficiency of the bilateral cooperation, the two sides should collaborate in order to carry out agreements reached by high-ranking officials, particularly the outcomes of a State visit by the Vietnamese President to Laos in August 2021.

The two countries were urged to seek new sources and orientations for cooperation projects, especially strategic infrastructure that connects the two economies and capitalise on the seaport system and 17 free trade agreements Vietnam has signed, including the Regional Comprehensive Economic Partnership (RCEP), so as to expand markets for exports of both Vietnam and Laos.

He stressed the need to enhance cooperation in defence, security, education-training, healthcare, people-to-people exchanges, partnerships between localities, and continue supporting each other at international forums, especially in maintaining solidarity and the central role of the Association of Southeast Asian Nations (ASEAN).

For her part, Vice President Yathotou voiced her delight at paying an official visit to Vietnam in her new position and conveyed regards from General Secretary of the LPRP Central Committee and President of Laos Thongloun Sisoulith to President Phuc and high-ranking officials of Vietnam.

She highly valued the Vietnamese people’s recent achievements in all fields, especially in the implementation of the resolution issued at the 13th National Congress of the Communist Party of Vietnam.

She also thanked the Vietnamese Party, State and people for their support to Laos during the past struggle for national independence as well as the current cause of national construction, protection and development, pledging that she will spare no efforts in strengthening the Laos-Vietnam great friendship, special solidarity and comprehensive cooperation.

The two sides underscored the significance of the ‘Vietnam - Laos, Laos - Vietnam Solidarity and Friendship Year 2022’ and agreed to hold activities marking the 60th founding anniversary of their diplomatic ties, and 45 years of the signing of the Vietnam - Laos Treaty of Amity and Cooperation, thereby contributing to bolstering sentiments among people of the two countries, particularly younger generations.

The two sides were delighted at the new developments in bilateral cooperation in all fields, noting that despite the impact of the COVID-19 pandemic, Vietnam and Laos have maintained regular high-level exchanges to effectively promote key cooperation mechanisms.

In the first quarter of this year, they said the two-way trade turnover reached US$403.6 million, up 19.22% over the same period in 2021. Vietnam currently has 214 valid investment projects in Laos with a total registered capital of about US$5.33 billion, emerging as one of the largest investors in the country.

They agreed to continue maintaining regular high-level reciprocal visits on all channels and effectively implementing agreements reached at the 44th session of the Vietnam - Laos Intergovernmental Committee, especially those on bilateral cooperation in 2021-2025 and 2021-2030.

The two sides will coordinate closely to organize practical activities within the framework of their Solidarity and Friendship Year 2022 to celebrate 60 years of diplomatic relations and 45 years of the Treaty of Friendship and Cooperation between Vietnam and Laos.

They also agreed to further strengthen and improve the effectiveness of cooperation in defense, security, transportation, education and training, cultural and sports exchanges, as well as cooperation between localities of the two countries.

The two sides affirmed determination to raise economic cooperation on a par with their special relationship. They committed to solve difficulties barring business operations, expand the connectivity of hard and soft infrastructure in transportation. telecommunications, energy, and digital economy, promote border trade, and deal with free migration, according to the VOV.

Exchanging views on regional and international issues of mutual concern, the two Vice Presidents said Vietnam and Laos will continue to coordinate closely and support each other at multilateral forums, especially the United Nations, ASEAN and Mekong sub-regional cooperation mechanisms. They voiced their strong support for ASEAN’s solidarity and its central role in addressing regional and international issues by peaceful means and in accordance with the law.

Vice President Pany Yathotou respectfully invited Vice President Vo Thi Anh Xuan to pay an official visit to Laos at an appropriate time, and the invitation was accepted with pleasure. 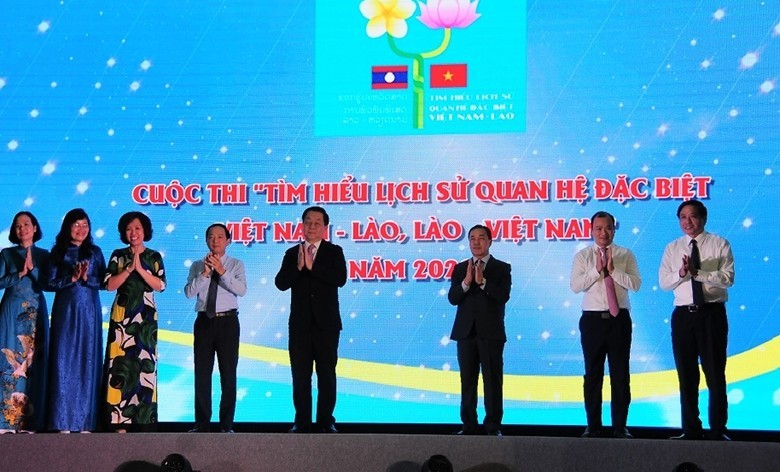 The quiz sends a meaningful message that contributes to spreading the history, friendship, and special solidarity between the two Parties and the two countries in the fight for national liberation and in the cause of building socialism.
June 15, 2022 | 08:34 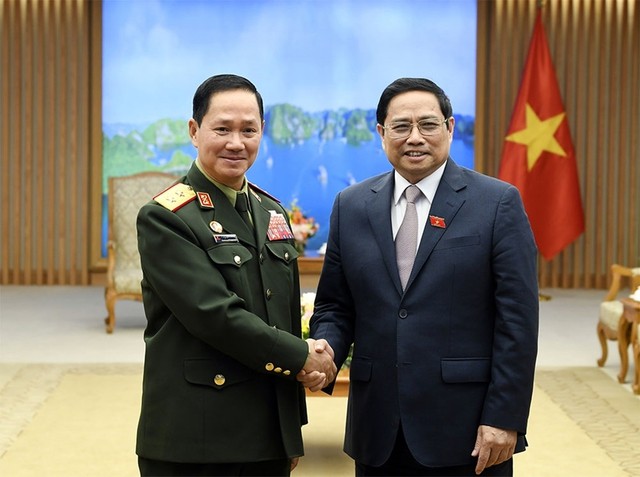 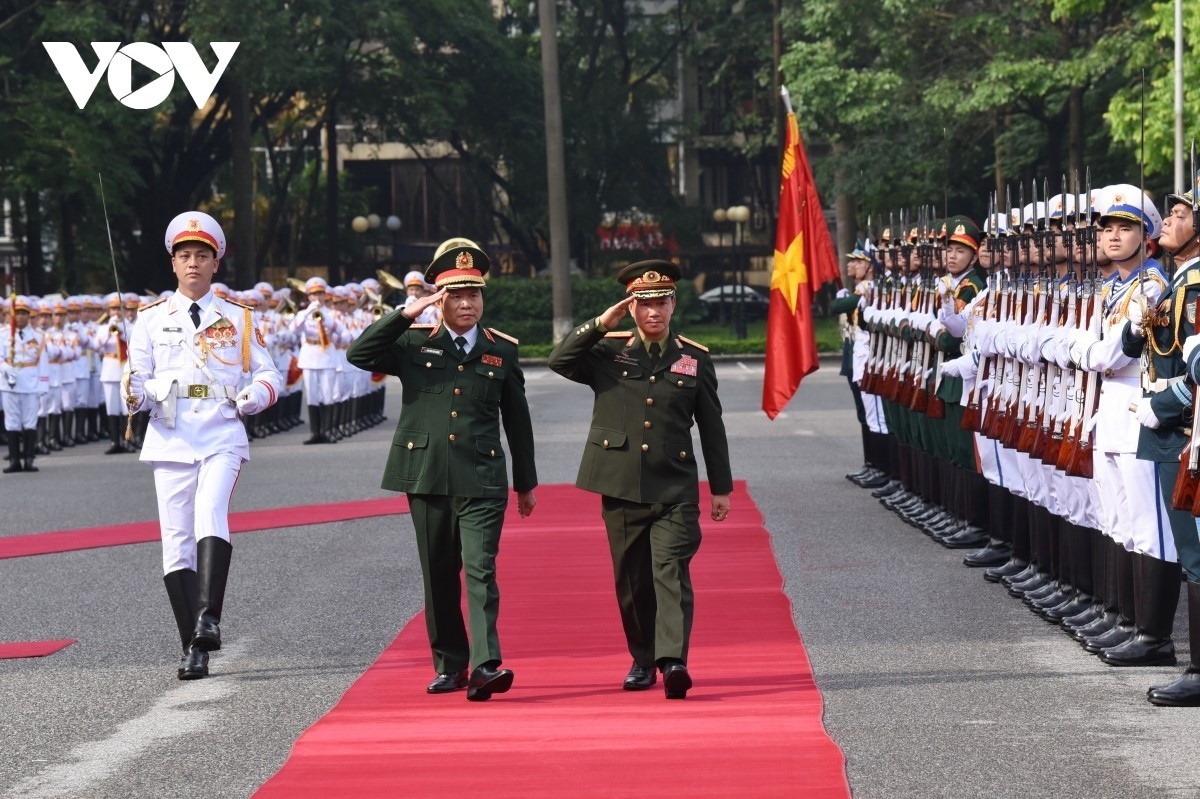 Sen. Lieu. Gen. Nguyen Tan Cuong, Chief of the General Staff of the Vietnam People’s Army and Deputy Minister of Defense hosted a ceremony on June 2 to welcome his Lao counterpart Khamliang Outhakaysone, who is in Hanoi for an official visit to Vietnam.
June 03, 2022 | 06:29