Authorities of Vietnam’s central province of Quang Nam and the neighbouring Lao province of Sekong on August 14 organised a ceremony to officially celebrate the pair of Nam Giang – Dakta Ok international border gates.

The Nam Giang – Dakta Ok border gates were upgraded to the international status earlier this year.

In his remarks, Chairman of the Quang Nam province People’s Committee Le Tri Thanh highlighted the close ties between the two localities, saying they have worked together to build a common border of peace.

The upgrading of the gates is expected to facilitate economic, trade and investment links between the two countries and the two provinces in particular, and especially meeting the increasing demand for export-import, he said.

Vietnam and Laos have been making every effort to put the international border gates into operation despite the rapidly-evolving Covid-19 situation in both countries.

The upgrade aims to open up new opportunities for partnership between Vietnam’s central key economic zone and Laos’ south-central and Thailand’s south-east regions, attract more international investors into the region, support the development of the East-West Economic Corridor and promote the building of ASEAN Community.

On the occasion, the Vietnamese side presented 100 tonnes of rice to border residents in Sekong.

On March 16, 2016, the Vietnamese and Lao Governments signed a protocol on the countries’ borderline and border markers, along with an agreement on regulations for land border and border gate management. These documents took effect on September 5, 2017./.

Vietnamese Businesses Contribute to the Socioeconomic Development of Laos

On Oct 13, the 17th anniversary of the Vietnamese Entrepreneur Day was held in Laos. With 400 investment projects, Vietnam is the third-largest investor in the country, following Thailand and China.
October 13, 2021 | 22:46 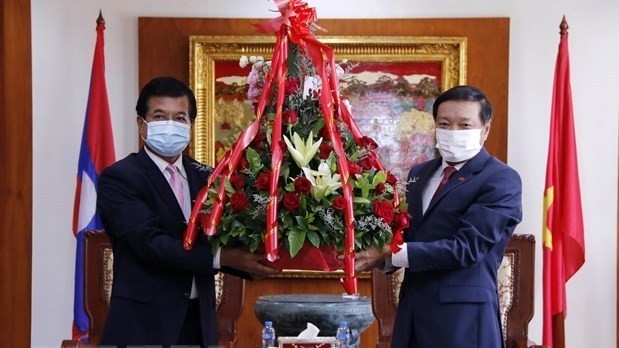 A Lao delegation visited the Vietnamese Embassy in the country on September 1 to offer congratulations on Vietnam’s National Day (September 2).
September 02, 2021 | 08:44