Vietnam Revolutionary Press Day: Freedom of speech and freedom of press are fundamental human rights that Vietnam is committed under the general principles of the Universal Declaration on Human Rights.
VOV5
June 21, 2020 | 15:31

But this is a sensitive issue that hostile, reactionary forces always abuse to sabotage the Party, State, and the socialist regime in Vietnam. They always fail thanks to the promotion of freedom of speech and the press in Vietnam.

As a responsible member of the UN, Vietnam has signed international treaties on ensuring fundamental human rights and citizen rights including the right to freedom of speech and freedom of press.

Vietnam is a country of free press and speech

Citizens’ right to freedom of speech and the press is mentioned in Article 11 of the Press Law which says citizens have the right to express opinions on domestic and world affairs, contribute opinions on the formulation and implementation of the line, guidelines and policies of the Party and laws of the State.

Article 13 says, “The State shall create favorable conditions for citizens to exercise their right to freedom of the press and freedom of speech in the press, and for the press to properly perform its role. The press and journalists shall operate within the framework of the law and shall be protected by the State.

No one may abuse the right to freedom of the press and freedom of speech in the press to infringe upon the interests of the State and the lawful rights and interests of organizations and citizens. The press shall not be censored before being printed, transmitted and broadcast.”

Vietnamese citizens’ right to freedom of speech and freedom of the press, and the right to access information comprehensive and easy to exercise.

Rights to freedom of speech, freedom of press are exercised based on the country’s conditions

Freedom of speech and freedom of the press are approached differently in different countries, because of fundamental differences in their history, culture, ideology and political regime and these rights are never allowed to be abused to sabotage national interests, undermine an inpidual’s dignity and honor, or negatively affect community morality or the social order.

Article 11 of France’s 1789 Declaration on Rights of Man and the Citizen says the free communication of thoughts and of opinions is one of the most precious rights of man: any citizen thus may speak, write, or publish freely, except to abuse this liberty, inpidual cases to be determined by law.

Though the US does not have a specific law on the press, many legal opinions have placed limits on the press and press-related rights and responsibility to avoid sabotage of national security.

Clause 2, Article 29 of the 1948 Universal Declaration on Human Rights says “In the exercise of his rights and freedoms, everyone shall be subject only to such limitations as are determined by law solely for the purpose of securing due recognition and respect for the rights and freedoms of others and of meeting the just requirements of morality, public order and the general welfare in a democratic society.”

In its history, the world has learned the price of going beyond the limitations of freedom. It’s a fact that no country allows freedom of press or freedom of speech to stand above and outside the law and sabotage national interests.

Throughout national construction and defense, the Vietnamese Party and State have always considered ensuring and exercising the rights to freedom of speech and freedom of press one of the major solutions to inspire and promote people’s will, aspiration, intellectuality, spiritual strength, democracy, equality and civilization.

The right to freedom of speech and freedom of the press in Vietnam has been constantly promoted. Moreover, during its international integration Vietnam is always ready to learn from the advanced experience of other countries./. 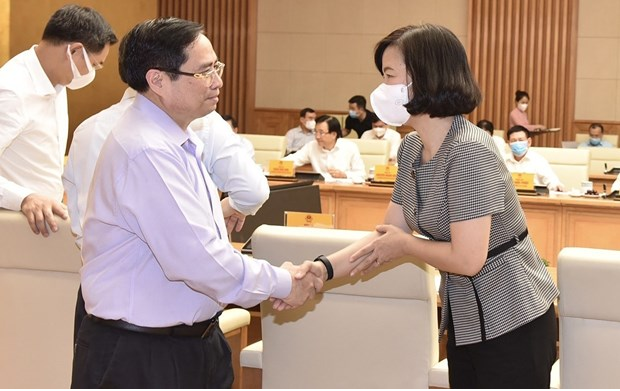 On the afternoon of June 20, Prime Minister Pham Minh Chinh chaired a meeting of press agencies on the occasion of the 96th anniversary of Vietnam Revolutionary Press Day (June 21, 1925 - June 21, 2021) and affirmed that the Government always appreciated and facilitated the operation of press agencies.
June 21, 2021 | 16:18 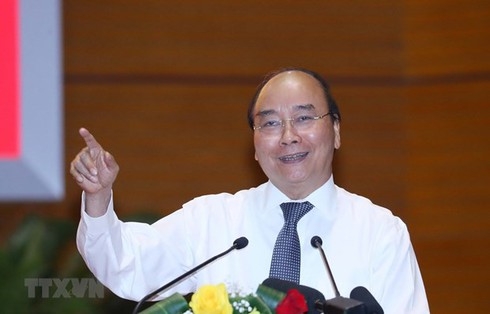 Prime Minister Nguyen Xuan Phuc and Deputy Prime Minister Vu Duc Dam has extended their greetings and lauded the media for its important contributions to the fight against the COVID-19 pandemic, on occasion of the 95th anniversary of the Vietnam Revolutionary Press Day, reported VOV.
June 17, 2020 | 09:42 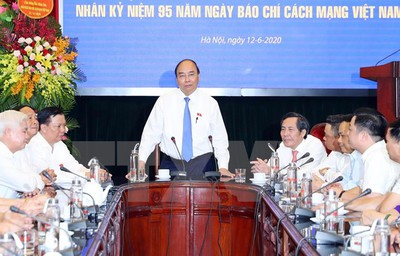 Prime Minister Nguyen Xuan Phuc has hailed the huge contributions generations of Vietnamese journalists had made to the cause of national liberation in the past and the country’s development today.
June 14, 2020 | 05:56