In reply to a reporter’s question on Vietnam’s position on the US’s Interim National Security Strategic Guidance, Hang said that there have currently been many ideas and initiatives on cooperation in the Indo-Pacific region proposed by countries inside and outside the region, according to VOV.

Vietnam welcomes initiatives that contribute to peace, stability, cooperation, and development in the region as well as initiatives that are based on law and respect for international law, the legitimate rights and interests of all countries and which ensure the central role of ASEAN in the forming regional structure, Hang added.

The 24-page interim national security strategic guidance, which mentions China and its government some 20 times, "lays out the global landscape as the Biden administration sees it, explains the priorities of our foreign policy and specifically how we will renew America's strength to meet the challenges and seize the opportunities of our time," U.S. Secretary of State Antony Blinken said hours before the report's release. The guidance reiterates ideas key to the administration's foreign policy vision such as revitalizing democracy, investing in American competitiveness, as well as strengthening U.S. alliances.

On the military front, it states "our presence will be most robust in the Indo-Pacific and Europe," noting that the global posture review currently underway will reflect those priorities. China is now "the only competitor potentially capable of combining its economic, diplomatic, military, and technological power to mount a sustained challenge to a stable and open international system."

On the military front, it states "our presence will be most robust in the Indo-Pacific and Europe," noting that the global posture review currently underway will reflect those priorities. Apart from NATO, Australia, Japan, and South Korea, listed as among Washington's core alliances, Biden also vowed to deepen Washington's partnership with India, New Zealand, as well as Singapore, Vietnam, and other Association of Southeast Asian Nations member states, according to Nikkei.

Regarding a meeting of US, Japanese, Australian and Indian leaders, Hang stated Vietnam always keeps a close watch on developments in the region, including foreign policies of major countries.

Vietnam hopes the countries continue contributing to peace, security, stability, and prosperity in the region and the world, maintain cooperation and respect the central role of ASEAN in the forming regional structures, she added. 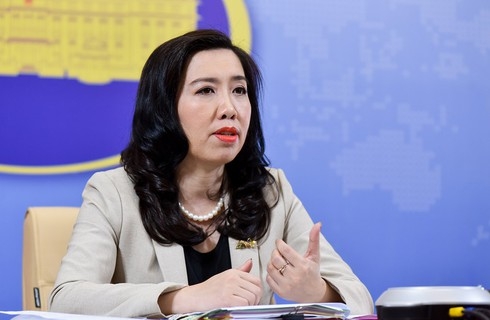