Poland’s cinema as well as cooperation between Vietnam and Poland in this field was the main focus of a workshop in Hanoi on October 28.

The workshop, themed “Country in focus: Polish cinema,” was held within the framework of the fifth Hanoi International Film Festival (HNIFF) that kicked off at the Cultural Friendship Palace on October 27. 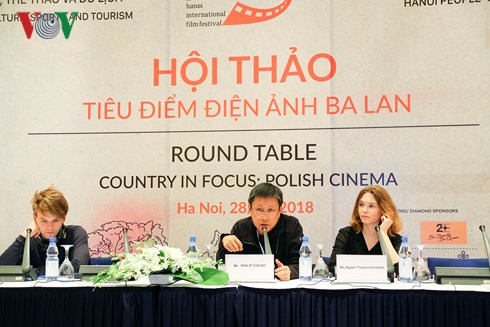 Delegates in the discussion (source: VOV)

The list of Polish movies to be screened during the festival was also introduced at the workshop, including Ashes and Diamonds, Nights and Days, The Promised Land, The Pianists, Tatarak, One Way Ticket to the Moon, Plan B and Silent Night.

The 5th HANIFF features 147 outstanding films from nearly 50 countries and territories, including more than 40 films of Vietnam. Many of them have never been screened at other Asian film festivals.

Aside from entries vying for awards, the biennial event also has a non-competition section with outdoor film screenings, exchanges, and a fashion show.

Other activities include a project market, a script-writing camp, and an exhibition on filming locations in Vietnam.

How to make trendy Korean Tteokbokki from Vietnamese rice paper?

Vietnam to get international support in Covid-19 fight