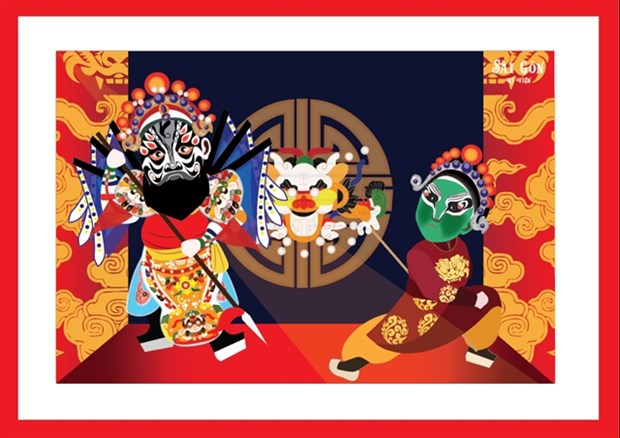 The characters are small and chubby, with stubby limbs and oversized heads to make them resemble children.

The collection of characters is part of the project Sai Gon Hi Vien, featuring 'hat boi' figures like Khuong Linh Ta, Moc Que Anh and Than Nu, along with unique ’hat boi’ masks.

“By painting in this style, I want to offer a new and modern perspective on traditional art for young people,” the student of Ton Duc Thang University in Ho Chi Minh City said.

From a young age, Huy was interested in studying the traditional arts of southern Vietnam, and ’hat boi’ was one of them.

The more he learned about 'hat boi' from the internet and books, the more he realised it was in danger of being lost.

The idea of how to save the traditional art that used to be widely popular in the south obsessed the young man. 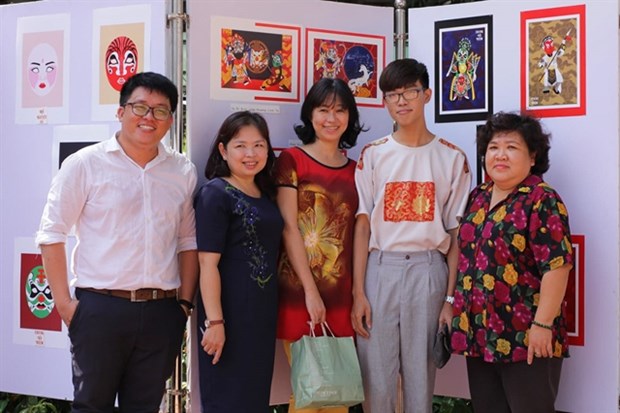 After graduating from high school, he decided to apply for the Faculty of Graphic Design at Ton Duc Thang University.

Huy said he could never become a 'hat boi' artist, but his gift for painting allowed him to enliven 'hat boi' characters.

At the end of the second term, each student had to choose a topic. While others chose modern styles, Huy chose music, specifically 'hat boi', and embarked on the Sai Gon Hi Vien project which aims to provide a new perspective on traditional theatre and bring it closer to the community.

Initially, the project included paintings of 12 'hat boi' characters like Khuong Linh Ta, Truong Phi and Ta On Dinh painted in chibi style with strong colours. Then Huy kept on studying and created more figures to enrich his collection.

After university, Huy continued to study the art form on the internet, whilst visiting museums and talking with 'hat boi' artists to ask about the makeup, costumes and actions of each figure.

“It takes me just several hours to paint simple, gentle characters, but it might take weeks to create evil and sophisticated ones. I don't paint the original figures; I try to add more creative elements to attract young people,” Huy revealed.

He also adds specific notes about each 'hat boi' figure to provide background information for viewers with little understanding of the traditional art.

To arouse interest in 'hat boi', viewers need to be able to recognise the figures, and distinguish them as good or bad characters and understand the implications of their acts.

“People love the beauty and the content. As long as they understand, they are naturally interested,” he said.

Huy also had the idea of putting his chibi characters on stage by creating miniature theatres in which they perform excerpts from plays.

“I enjoy turning the old into new. Traditional culture is largely ignored by young people. I want to renovate it with a modern style to entice them. I hope I can make people who have never seen ’hat boi’ to get curious,” he added.

Realising the meaning of the Sai Gon Hi Vien project, Huy’s teachers and friends have helped him to hold an exhibition. The project has succeeded beyond expectations by drawing attention from many people, particularly students.

That project has concluded, but there's more good news for the 21-year-old student because more organisations and inpiduals have commissioned posters from him and asked him to design stages for art events.

“I'm really happy because people are looking at my creations. I haven't made much money, but I feel like a success because I'm living my passion and sharing my work with others who share the same interests,” he said.

But that’s not the end to his idea to renew and popularise ’hat boi’. He is studying how to print his chibi paintings on packaging and labels, and he has established a facebook fanpage Dau An Sai Gon (Sai Gon Imprints). The page contains detailed notes about various art forms to prepare for the release of his book, Duong Vao ‘hat boi’ (Road to 'hat boi').

“It is a positive sign that Huy’s creations with 'hat boi' like postcards, paintings and stickers have been well received by the public,” commented cultural researcher Huynh Ngoc Trang. “That is thanks to Huy pursuing his own direction based on his passion.”/.

Fall in love with tranquility of Bai Khem in southern Vietnam